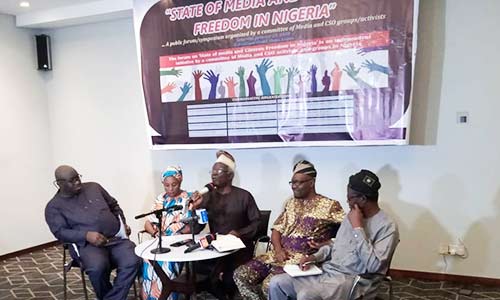 Foremost Human Rights Activist, Femi Falana, SAN, has said that even though the Hate Speech Bill has been suspended, the Federal government is still indirectly implementing it as seen in the cases of AgbaJalingo, Sowore and some others.

The learned silk made this statement during his opening Speech at the Public Symposium on the State of Media & Citizens Freedom in Nigeria, which is an event organized by a Committee of Media and CSO Groups and activists in Nigeria. Falana, who made this observation, chaired the panel of Kadaria Ahmed, Akinreti, NUJ Chairman Lagos State, Prof. Bola Akinterinwa, Former DG, Nigerian Institute of International Affairs, Edet Ojo, Executive Director of Media Rights Agenda, and Dr. Abiola Akiode represented by Mr. Elias.

According to him, in Kano state, a singer was jailed for two years for singing about dollars, and both state and federal government are busy trying to shrink our rights to freedom of expression while the citizens are busy going after the National Assembly; that the list is embarrassingly long.

Falana also cited the case of Nwankwo v. the State in 1983, a case between Arthur Nwankwo and Jim Nwobodo, both contesting for the governorship position in Anambra state. He noted that Nwankwo published an article on how Nwobodo, the incumbent Governor ruined Anambra state and brought young female students to the state house for pleasure; and that alone got Nwankwo, a contestant, one year jail term just because it was seen an embarrassing to the incumbent.

He also added that history has shown that we as a people know how to resist tyranny and brutality and so we need to familiarize ourselves with it so the people today can be motivated to do even more.

One of the Panelists, Kadaria Ahmed, whilst speaking said that we have very selfish media owners who make a lot of money of news reporting and have failed to protect their people, she also talked about the responsibility of the media as fake news and hate news are a reality.

Kazeem Akinreti, NUJ Chairman, Lagos State, said that the role of the media is very clear in the constitution of the country and we have seen the political class exhibiting impunity at the highest order when some Journalist err even as the media law is clear on how to treat an erring journalist. It was also added that the NUJ has a lawyer in Lagos that handles cases of their members in court, so they have stood up for her members and will continue to do that.

During the question and answer session, it was asked about when we reduced to the level of charging Journalists of Terrorism in Nigeria. Prof. Bola Akinterinwa, in talking about the issue, the challenge and way forward, noted that the issue is the embarrassments, killings of journalists while performing their duty. He added that the provision of the constitution made the media to monitor the government on the people’s behalf; that the citizens of Nigeria want Journalists to be their natural solicitors and so if they fail to deliver on that it as a result of their being brutalized or killed in the course of their duty, it means they have failed the people. He believes that journalists here are not well coordinated and need to do more in this aspect.

On the challenge, he noted that the killings and intimidation is not limited to Nigeria. He emphasized that the protection and survival of Nigerian journalists should be taken very seriously because we are the most active in Africa. That, the brutality serves as a strong message to the international community on how Journalists are treated in Africa by political leaders.

Speaking on the solution, he said that political leaders should provide leadership by convening a summit for journalists in the region to discuss these issues.

Another panelist, Edet Ojo, started by saying that Section 24 of the Nigerian Constitution has mandated the media to hold government accountable for the people but there is no specific protection for them.

“The citizens must rise up to protect and defend journalists because their duty is for the people. We are the ones responsibly for the way the government treat us. The citizens are not even willing to stand up for their own rights, let alone , stand up for the rights of others.”

“It is quite clear the government has systematically destabilized every internal democratic setting that should hold them accountable for their actions and so the option we have is to seek assistance internationally. If we want to practice democracy, the government should embrace democracy in its entirety, including the right to freedom of expression.”

On Action Step, it was noted that we need to compile a list of government officials carrying these acts and send to the international community to take note of them and place several bans on them; approach the United Nations to do a report on human rights situations in Nigeria; and lodge a complaint on the Human Rights council of the UN to mandate the region to produce an annual reports on Human Rights.

Kadaria further added that regarding responsibility of the journalists, all the things that make us different are the things the media have been reporting in the last 6 years, that this is not good for the media industry and for the people. She cited the case of the Amotekun security outfit being projected by the South Western governors. According to her, when it comes to standing up to support them for the implementation, other non-Yoruba’s will back out but forgetting that they will be protected by the same agency if they eventually start operation.

“This is so because the media has made it look like a Yoruba agenda alone and so only Yoruba’s should be concerned with it. The media needs to do some soul searching and owners of media house must invest more in their people, their welfare and security.

“We need to have a regulatory framework for ourselves. Our standards have collapsed and need to be revived. A free press is central to democracy,” she said.

Falana SAN added that there is a great need to bring back the people by the media rather than dividing them and if we put anything online, we must be ready to defend it if the need arise and so let us put up things that are verified. He also said the south western governors should come up with a regulatory framework for the security outfit to make sure it aligns very well with the provision of our constitution.

Dr. Abiola Akinode represented by Mr. Elias gave his own input on the discussion and said that the media is already in a sorry state.

“Some journalists are not paid well and so they can’t carry out their duty very well. We should critically look at the way journalists are recruited in the country so that we would have those passionate and interested in the job to be absorbed into the system. Also, the capacity of freelance journalists must be built also,” he added.

During the time for Audience participation, Adewale Adeyanu, the PRO of the joint National Association of Persons With Disability, JONAPWD, said that at the national level, they are trying to close their voice; that even when they try to join the government, they still want to close their mouth. It was added that the disability Act is there, but they are not interested in the implementation, and so something needs to be done about it.

Responding to that, Mr. Femi Falana, SAN, said they are working on the Act and their association met with him. Mr. Ken Ugbeche, a reporter added that the media is like a mirror that report events, not invent news, and so the people must be willing to carryout protests or other things to speak up against these oppressions, then send to the media for reporting, and that the media must be willing to report these news for the people.

Executive Director if AYICRIP, Chris Ibe, added that the challenge the Civil Society organizations have is that when they have the content and push it to the news room, it will just remain there, and no action on it; that NADECO in the past was really supported by the media and the collaboration was good.

READ  We Are Suffering: Stranded Nigerians In Saudi Arabia Beg For Evacuation (VIDEO)

One of the participants asked if there is anything like Media Solidarity, whether if it ever existed or will ever exist.

Responding to the comments and questions, Kadaria said that if we fight for something, we need to keep fighting and not relent. She said that journalists must shape their behaviours accordingly by thinking of the type of country they want and avoiding brown envelops. She also asked why some Judges are really quick to jail Journalists indiscriminately because it is really worrisome; that it was attributed to the fact that the Judiciary lack independence and so depends on the state or federal government for their welfare. That way, they tend to play along with those responsible for their welfare.

Prof. Bola, on the other hand noted that journalists are not meant to be in opposition but mediators. Beyond commentary they need to do proper analysis and then conclude. He also added that on media solidarity, there is solidarity but we need to define our way forward and others follow.

Notable was the stand taken by The Punch newspaper not to report any news of the government when Sowore was harassed in the court room. When will other media house do same for their oppressed colleagues? It was asked.

The high point of the event was the marking of the birthday celebration of Mr. Kayode Komolafe by the organizers, who clocked 60 years. Mr. Nduka Obaibgena, Founder Arise Television, was called upon to stand on his behalf as they cut a cake and sang birthday songs for him.