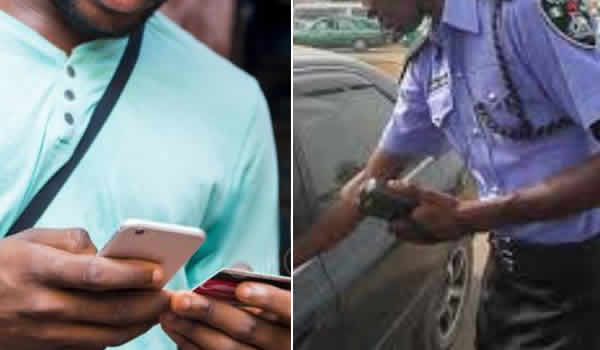 The police officer stopped the car and asked the passengers to come out of the car for a search on a busy road and he can be seen in the video operating the POS machine.

Inside the 45-second video, the policeman can be seen holding a POS machine as he exchanges conversation with one of the passengers to hand over his ATM card.

A yet-to-be identified passenger can be seen moving around and yelling on top of his voice that he will not handover his ATM card while the police officer insists that he must do as he said.

As heart breaking as this video is, it can not be a surprise for Nigerians who have witnessed, watched and read several bribe-taking acts of police officers.

As at the time of reportage, the time of the incident is unknown likewise the venue of the ugly incident.

It reported that days after videos of a vehicle information officer collecting bribes and police officers went viral, another video of a bribe-taking policeman lying to his colleagues over certain amount of bribe he collected from a motorist has gone viral.