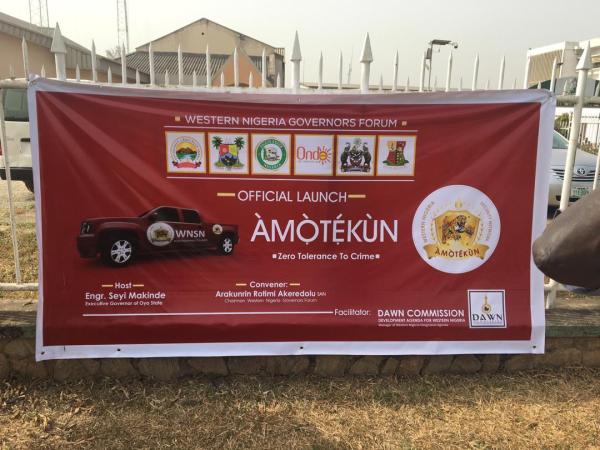 Activities marking the launch of Operation Amotekun in the South-West is about to kick-off at the Oyo State Governor’s Office, State Secretariat in Agodi, Ibadan.

There were initial fears that the programme may not hold as scheduled as a result of the perceived apprehension by the presidency.

As of the time of filing this report, the venue for the launch is filled with delegates and other stakeholders from the collaborating states.

Some of the 120 red security patrol vehicles for the launch of Operation Amotekun were seen at the car park of the Governor’s Office.

Local security personnel, with some dressed in a brown uniform and others in a grey uniform with caps to match, were on the ground in readiness for the inauguration.

The Director-General of the Development Agenda for Western Nigeria, Seye Oyeleye, and delegates from Ogun, Oyo, Osun, Ekiti, Ondo and Lagos States were on the ground.

Also present were men of the State security services, police officers and men of the Nigerian Security and Civil Defence Corps.

Traditional drummers and singers were also seen treating the gathering to Yoruba solidarity and cultural songs.

Oyeleye said, “You can see that we are trying to ensure that logistics are being prioritised. With what is on the ground, there is no doubt that the programme is set to be launched.”

Expected at the launch, aside from the governors of South-West States, are local government chairmen from the zone; traditional rulers; the Agbekoya; hunters, vigilance group; men of the Oodua People’s Congress; farmers groups; community leaders and traditional chiefs and kings.