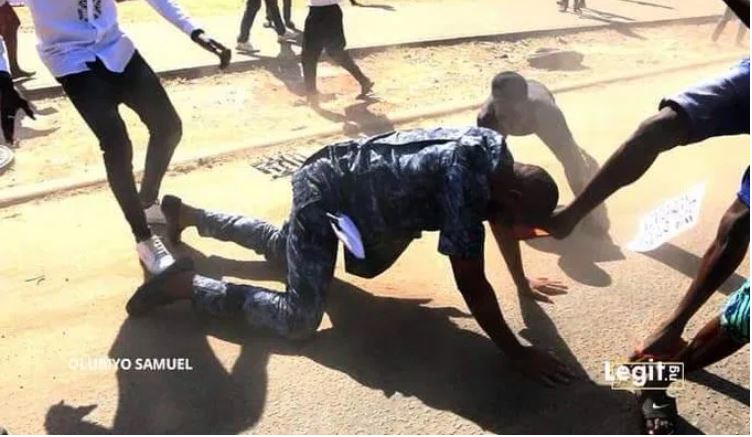 The Nigerian Police with the Buhari government were being blamed by some Nigerians yesterday for being indifferent to the attack unleashed on PDP member and activist, Deji Adeyanju by hoodlums in Abuja.

Adeyanju who staged a protest in front of the headquarters of the National Human Rights Commission to canvass for obedience to a court order by the Buhari administration got more than he bargained for.

Pictures and videos posted on Twitter show hoodlums, and counter-protesters descending on him and beating him blue and black. He is now hospitalised. Posts on Twitter claimed that the police watched the attack without making any effort to protect Adeyanju.

The incident has once again triggered some umbrage against the Buhari administration for its intolerance of dissent.

Commenters on Twitter on Monday were critical of the government:

“Miscreants and thugs hired by the Buhari regime to attack the anti-Sowore/Jalingo/others protest to the NHRC have seriously injured Deji Adeyanju. They attacked us in the presence of the @PoliceNG. The Nigerian government under Buhari is commissioning thugs to attack citizens”, reported Sir Ariyo-Dare Atoye, one of the posts on the trending subject.

Fisayo Soyombo wrote: All those who mercilessly descended on Deji Adeyanju today, I promise you: Karma will find you. The politicians who hired those thugs and the policemen who watched this happen, I can assure you that you’ve not gone scot-free. Your comeuppance will find you. ALL OF YOU!”

“This assault on Deji Adeyanju may spark happiness in the ‘hearts’ of evil supporters of a tyrannical regime but it is only an invitation to anarchy – it stirs anger in the hearts of revolutionaries who do not even know it yet. When dictators go this route, their end is not far”, Demola Olarewaju said.