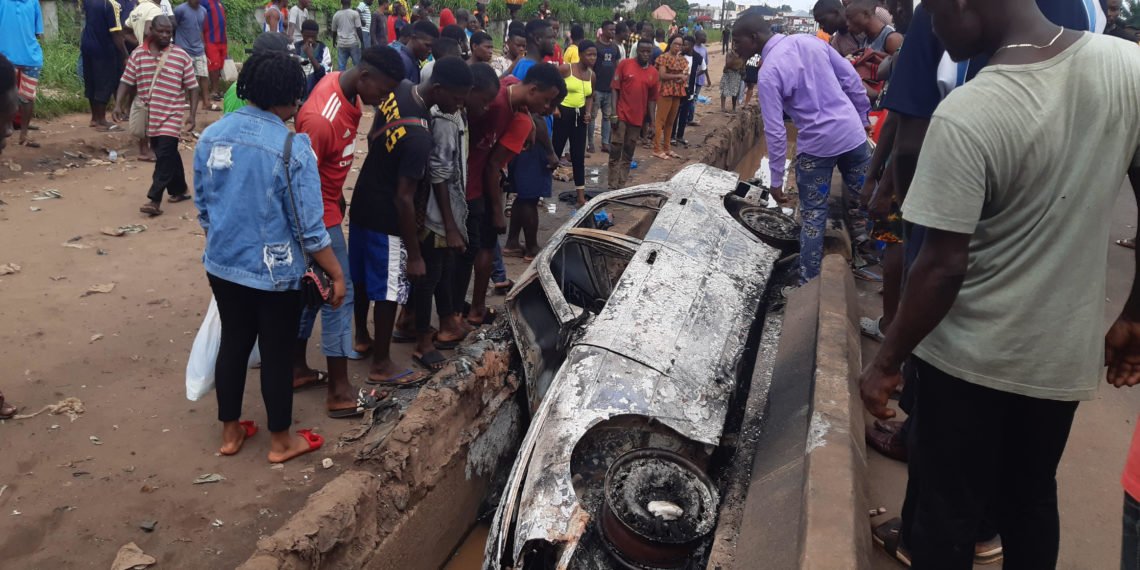 Protest rocked Uselu Community along the Benin-Lagos highway on Saturday morning as a motorist killed three sisters who were going to the New Benin Market.

Another female, who was accompanying the sisters to the market, was also killed.

The incident was said to have occured at about 6:15am.

Driver of the BMW car and his wife were trapped inside the car, which plunged into an open drainage along the road.

Identity of the driver was not known as at press time.

Youths of Uselu Community took to the street in protest and blocked the busy highway.

The road leads to the University of Benin where the closing ceremony of the 2019 National Festival for Arts and Culure is scheduled to take place.

Many persons going for the NAFEST closing ceremony had to take alternative routes.

An eyewitness, Osas Ikpomwosa, said they woke up to find four dead bodies along the road.

Osas stated that one of the victim was pregnant.

He said policemen came and rescued the trapped driver and his wife.

Osas however said they set bonfire on the road because policemen that came to disperse the protest shot live bullets at them.

He said four of the protesters were shot and taken away by the police.

“This accident happened this morning around after 6 opposite Uselu park involving four females, a man and a woman.

“One of the bodies was inside the gutter. Others were across the road. It was a BMW car. Police came and rescued the man and his wife who was injured.

“The police took the dead bodies away. They came back and told us they want to take over situation. The police suddenly started shooting. The reason we blocked the road was because the police took our person they shot away.”

One of the youth leaders, who gave his name as Evans Uselu Man, said the state government must cover the drains.

“This morning, four big girls were killed. They were waiting for bus when the came and hit them. They wanted to jump but because of the sand and side drains.”

“We will clear the road but government should return those boys they took away.”

He said his men were on ground to restore peace and order.