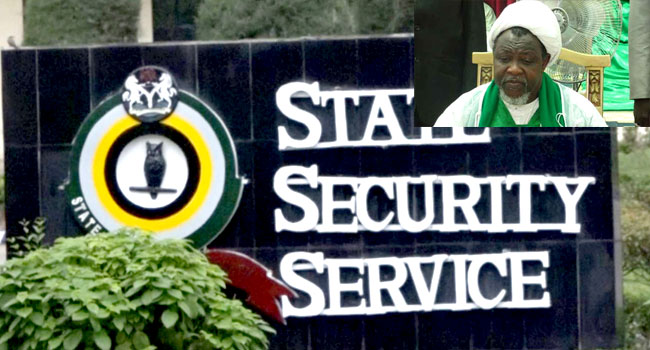 The Department of State Services (DSS) said today that it has received the order granting its detainee, Sheikh Ibrahim El-Zakzaky leave to travel to India for medical treatment.

Peter Afunanya, who has now added “doctor’ to his title, said the service is liaising with relevant stakeholders to ensure compliance”.

“Conformity with the order is in line with the Service’s avowed commitment to the Rule of Law inherent in a democracy”, he said.

El-Zakzaky, leader of the Islamic Movement in Nigeria and wife Zeenat have been in DSS detention since December 2015.

On Monday, a Kaduna High court judge, Justice Darius Khobo, in a much awaited ruling, ordered that the IMN leader be accompanied to India by officials of the Kaduna State government for medical treatment.

He, however, did not give any time frame as to how long they will stay in India.

But he said the IMN leader must return immediately after his discharge from the hospital to face his charges.

The IMN leader and his wife had applied to the court seeking to travel, following poor health while in detention.

The State Director of Public Prosecution, Mr Dari Bayero, said the team would study the judgement to see if there were grounds for appeal.

Bayero who is the respondent in El-Zazaky’s application, said the team had taken time and examined the eight medical reports by Nigerian and foreign doctors that accompanied the IMN leader’s application.

“The context of the court ruling is that Sheikh Zakzaky and his wife are granted leave to travel out for urgent medical attention.

“The court looked through the medical reports filed and believed Mallam is indeed in dire need of medical attention.

“This is not a bail, but a leave to travel. So as soon as his discharge from the hospital and he returns to the country , his trial will resume,” he said.

Bayero said the team of lawyers would study the ruling and explore whether there is need for appeal. “We have a month to go through that.”

Mr Marshal Abubakar, counsel to El-Zakzaky recalled that before July 29, the lead counsel to the applicant , Femi Falana was in the court to move the application, which was adjourned to today.

” It is not a bail application as is being wrongly reported by some media, it was an application to save the life of the applicants, el-Zakzaky and his wife.”

According to him, “the ruling came up today and the court graciously agreed with Mr Femi Falana SAN and the various medical reports that were attached to the applications.

” There were eight medical reports that clearly shows the applicants are in dire need of medical treatment abroad.

“The court agreed that they should be allowed to seek for treatment that they seek for and with supervision,” Marshal said.

The IMN leader will be go for treatment at Medanta Hospital, New Delhi, India.

El-Zazaky had in the application said he and his wife would return to Nigeria as soon as they were discharged.