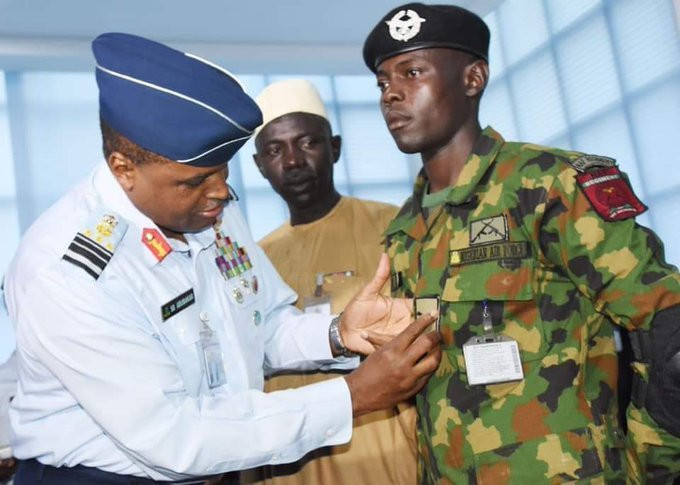 An exemplary personnel of the Nigerian Air Force has been given a befitting reward for returning N15 million.

The Nigerina Airforce Officer who returned €37,000 (N15 million) idenified as Bashir Umar has been given a double promotion for the exemplary act.

Asides being decorated with a new rank of Corporal for returning €37,000 to its owner, the former Aircraftman received a letter of commendation from the Chief of the Air Staff (CAS), Air Marshal Sadique Abubakar, at the Headquarters of the Nigerian Air Force in Abuja, during a special decoration ceremony

Speaking at the event, the Chief of the Air Staff (CAS), Air Marshal Sadique Abubakar praised Bashir for the rare act of integrity. He said;

“I am proud to say that we have found in ACM Bashir the rare qualities we stand for in the Nigerian Air Force.

“The special promotion of ACM Bashir to the rank of Corporal today apart from serving as a reward for good conduct is also to serve as motivation to other airmen/airwomen to aspire for such elevation,” he added.

Born on the 1st of June 1995 into the family of Mallam Bashir Abdulmumuni and Salamatu Aliyu in Maiha L.G.A. of Adamawa state, Bashir Umar was enlisted into the Nigerian Air Force on 1st August, 2016 after Basic Military Training at the Military Training Centre, Kaduna.