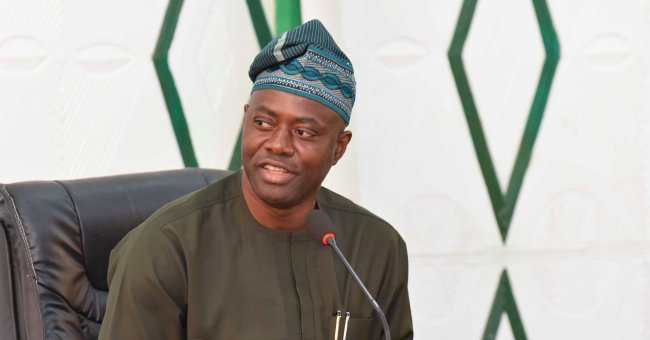 The All Progressives Congress (APC) in Oyo State has called on the federal government to investigate claims Oyo State Governor Seyi Makinde he is worth over N48 billion in assets and cash.

The party picked a hole in the public asset declaration, alleging the governor was playing the ostrich in anticipation of possible acquisition of questionable wealth at the expense of the citizens of the state.

Makinde had on Monday made public the assets he declared to the Code of Conduct Bureau, declaring his companies are worth N48 billion.

He also listed some properties in Nigeria and abroad as well as cash at home and abroad.

But reacting to the public declaration, Oyo APC in a statement by its Assistant Publicity Secretary, Prince Ayobami Adejumo, said: “The governor’s action was a ploy to give a false impression of his real financial status now so that he would have a safe landing when he leaves office with stupendous wealth.”

The party further added: “Most of the companies listed in the declaration were relatively unknown even in the local Oil and Gas industry let alone the global arena as far as members of the general public are concerned.

“How many oil rigs are in his possession and since when? Where are the operations base of those companies and what is their staff population?

“As a graduate of Electrical Engineering, we do not know of any ground that has ever been broken by Makinde to have fetched him such a humongous wealth.

“Even if he had had to lay claim to the commonwealth of a group of business partners to attract political favour, the governor should know now that elections are over.

“What manner of billionaire would abandon his business partially or completely for 13 years in pursuit of political ambition and still claim to have multiplied his wealth more than corporate players in a globally competitive sector like oil and gas?

“Does it mean that all monies he has lavished since 2006 were from donor agencies or directly from heaven?

“Without mincing words, we call on relevant agencies of the federal government to beam their searchlight on the content of the governor’s asset declaration form and dig out the real fact of the situation so as not to give room for a scripted looting of the resources of the Pacesetter State as this is the stock in trade of an average PDP governor.

“There are facts on ground indicating that the declaration made by Gov. Makinde is an anticipatory looting technique perfected during his recent secret visit to a fellow PDP governor in one of the oil producing states.

“Therefore, we urge those concerned to be on the lookout and ensure that no resources of the state are allowed to be either siphoned or diverted into private hands.”