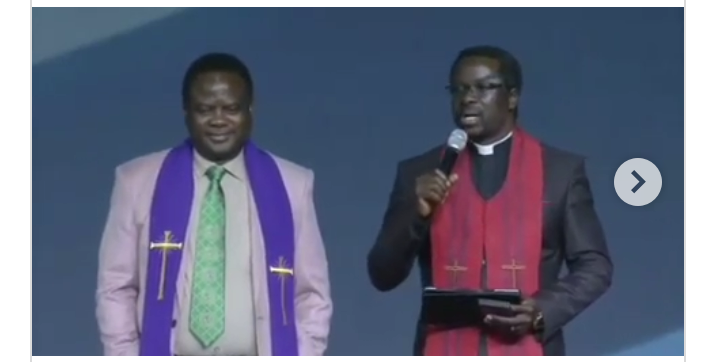 A new video has surfaced online, where some representatives of the Christian Association of Nigeria (CAN) visited the Abuja branch of the Commonwealth of Zion Assembly (COZA) during yesterday Church’s service.

The CAN officials during the visit pledged to stand and support the Senior Pastor of COZA, Biodun Fatoyinbo, who has been accused of rape by the wife of singer, Timi Dakolo, Busola, and another anonymous lady.

Busola granted an interview where she alleged that Fatoyinbo who was her Pastor when she was much younger, raped her in her father’s apartment when she was 17 and went on to have sex with her a few other times.

The news was greeted with widespread condemnation and even a protest was staged in front of COZA church in Abuja and Lagos, which prompted Fatoyinbo to step down as the Senior Pastor of the Church. He later released a statement, denying the allegation and vowing to challenge his accusers in court.

Speaking during the service yesterday, the president of CAN Abuja, Reverend Jonah Samson and CAN President North Central, Reverend Israel Akanji spoke to the congregation, pledging their support and prayers for Fatoyinbo and COZA church as they face this hard times.

In his speech, Reverend Jonah said CAN is behind Fatoyinbo and COZA as they stand this trying period.

On his part, Reverend Akanji in his speech said Jesus expects his followers to be like the good Samaritan who was there to give help to a wounded soldier and not turn his back on such a soldier. He also pledged his support to Fatoyinbo and COZA, adding that many Christians were praying for them.

Watch a video of the CAN leaders speaking during the visit below.

So CAN representatives went to COZA to show support for Biodun Fatoyinbo yesterday. Nigeria really is a "special" country lol pic.twitter.com/03ELk13XtP

Meanwhile, Kwamkur Vondip, the National Director, legal and public affairs of CAN, had said in a statement that COZA is not a member of CAN. The statement reads in part,

“The association recognises that COZA, to the best of our knowledge, is not a member of any of the families that belong to CAN. CAN, as an association; it is equally sad that there have been recurrent allegations of rape and infidelity against some gospel ministers and other Christians as well.”