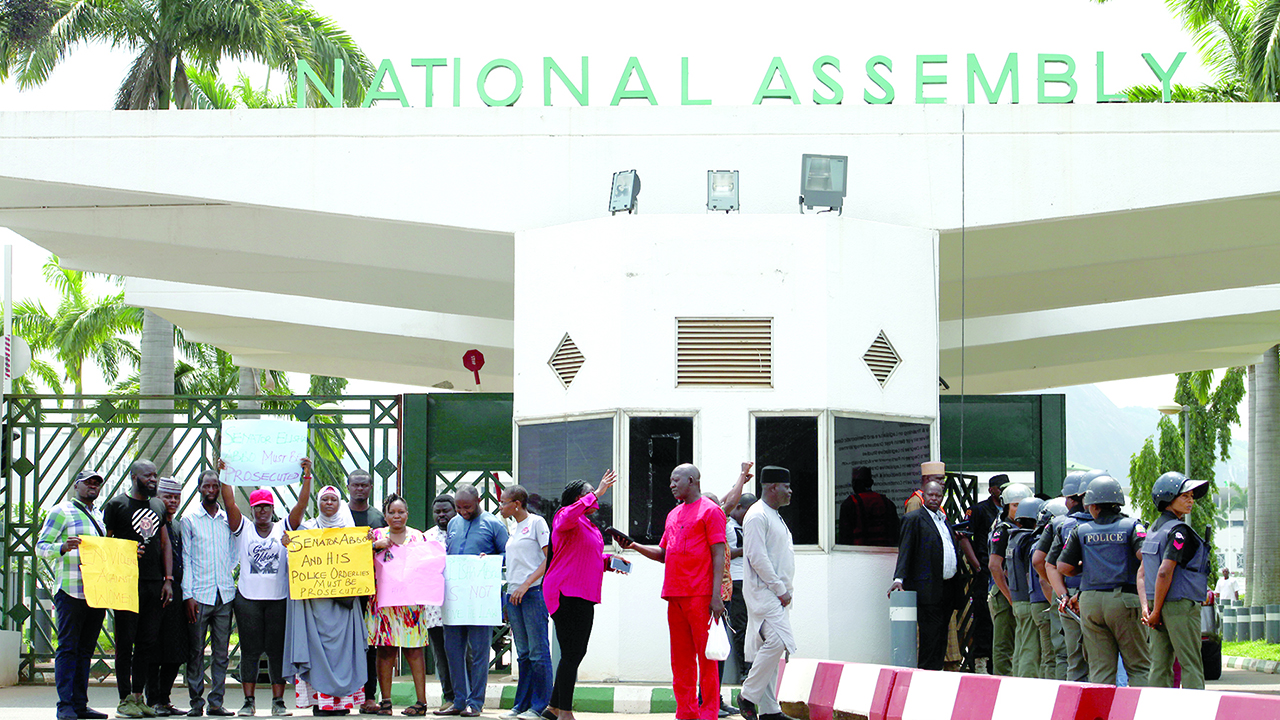 Outraged at a senator’s assault on a nursing mother, some Nigerians took their protest to the National Assembly yesterday. They demanded the immediate arrest and investigation of Senator Elisha Abbo who was caught on camera physically assaulting the woman at an adult sex toys shop in Abuja.

Though members of the group, Concerned Nigerian Movement (CNM), alleged that they were obstructed by arm- bearing security agents on their way to the National Assembly, they could not be stopped from passing their message.

Abbo, representing Adamawa North Senatorial District, was caught on video descending on the woman after she pleaded with him not to physically assault the shop owner whom the lawmaker had accused of insulting him by calling him a drunk.

The assault, which occurred on May 11 – nearly three months after Abbo became a senator-elect and a month before he was sworn in on June 11– came to public knowledge only on Tuesday when an online media platform sent out the video clip obtained from the CCTV camera.

It was learnt that during the attack, an armed mobile police officer looked on, and later attempted to arrest the victim.

The group, in its petition, demanded the prosecution of the lawmaker within reasonable time. The protesters also want the police orderly who was seen in the video to be made to face the law.

Members of the group had earlier marched to the office of the inspector general of police where a similar petition was lodged for immediate action.

The convener of the protest, Bukky Shonibare, said the action was to ensure justice is done.

“We protested today against Abbo for physically assaulting a young nursing mother at a sex toy shop here in Abuja.

“Our protest is hinged on the fact that when someone is placed in a position of leadership, his conduct should be exemplary. As the youngest serving senator, somebody in the hallowed chambers, we expect the highest level of decorum.

“Engaging in such an act against citizens is condemnable and when you are now a senator, one that is expected to make our laws, we believe it is impunity taken too far. Our first march was to the inspector general of police and we demanded four things: that he should immediately be arrested and properly investigated; we want proper prosecution of that matter that should be done within reasonable time; the decisions that are made must be made public so that Nigerians can know that we have a Nigeria Police that does not tolerate nonsense.”

The protesters said the action of the police orderly in the video clip who ought to safeguard the laws, ensure its enforcement, yet did not arrest the senator, went against Section 263, Subsection C of the Penal Code as well as Section 240 of the code.

Shonibare said they also marched to the National Assembly to “tell the legislators that this is one of their own, they must ensure that he is properly investigated.”

She said the promises they got from the Police Public Relations Officer, Frank Mba, on behalf of the IG, and Senator Sam Egwu on behalf of the Senate President Ahmad Lawan were that the matter would be prosecuted within a short time.

“It is unfortunate that an abuse like this goes on, human rights violations, where we have the constitution of Nigeria as well as international laws that we have signed to obey. We must obey these laws. If the proper thing is not done we will come back to cause civil disobedience until we achieve justice for the lady,” the convener said.

She said the protesters would mobilise more groups in their next outing.

“This video came out just last night and we have mobilised and we have made our message clear. When we come out again, we will have time to mobilise more human rights groups, more women groups to come out. One thing is that it is not only women that are standing, men are also standing, speaking against violence against women.”

Aisha Yesufu, an activist, said she was part of the protest because a video was trending showing a sitting senator assaulting a lady for actually doing nothing.

She expressed disappointment that the lawmaker went ahead to use the instruments of the state by calling the assistant inspector general of police and the divisional police officer of Maitama who obliged him, and the police did not stop him from the act only to be seen arresting the woman.

“We should all stand up and make sure that this country is for all of us, not for a few people. The Nigeria Police should know that their allegiance is to Nigerians and not the politicians. We all must speak out because silence is what is enabling them to keep treating us with disdain. We will no longer accept that, every Nigerian must ensure that justice is secured for the lady that was assaulted.”

Others who condemned the action of the lawmaker and demanded that he be punished include the Amnesty International; former Education Minister, Oby Ezekwesili; United Global Resolve for Peace (UGRP) and former chairperson of the Federation of Women Lawyers, Ekiti State branch, Rita Ilevbare.

Consequently, the Senate has set up a seven-member ad hoc committee to investigate the assault by Abbo of (PDP Adamawa North). The resolution to probe the matter was sequel to a motion sponsored by Uba Sani (APC Kaduna Central).

President of the Senate, Lawan, in his ruling, set up the probe panel which should report back within two weeks.

The PDP described the assault as an act of lawlessness and callousness by Abbo.

In a statement by its National Publicity Secretary, Kola Ologbondiyan, the party said as a law-abiding party, it “detests and completely condemns such an act of lawlessness and callousness as exhibited in the video and will therefore never condone it.

“Our party is also shocked that the harmless victim of the unprovoked assault is said to be a nursing mother, who ought to be protected.”

Meanwhile, the embattled Abbo has apologised to the assaulted woman referred to as Bibra and Nigerians, and as well as sought God’s forgiveness for his action.

At a brief press conference at the national secretariat of the PDP yesterday evening, Abbo, whose voice was emotionally laden, declared that his action was not a true reflection of his religious and family upbringing.

“It is with a deep sense of remorse and responsibility that I, Senator Ishaku Abbo profoundly apologise to all Nigerians, the Senate, the PDP, my family, friends as well as our mothers- the Nigerian women.

“I personally apologise to Bibra and her family for my action towards her, which has brought immense discomfort in our body polity. l have never been known or associated with such actions in the past.

“Regardless of what transpired prior to my expression of anger, I am sincerely sorry and plead that all men and women of good conscience should have the heart to forgive me. To err is human, to forgive is divine.”

Seeking God’s forgiveness, the lawmaker said: “To the church of God everywhere in the world, I am sorry. As an ambassador of Christ, much is expected of me. My family and religious upbringing do not give approval to such conduct and for this, as a leader, I seek forgiveness before God and all those who feel offended by my action.”