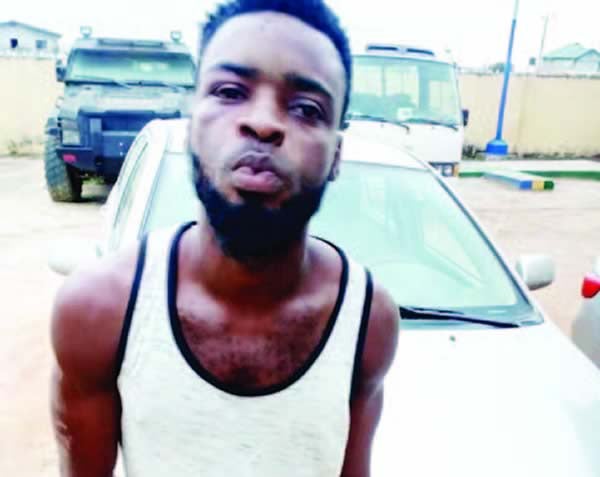 The Ogun State Police Command said on Monday that it had arrested one Philip Efosa for allegedly robbing one Uber driver of his car in Lagos.

Efosa, according to the command, was arrested on Sunday after he and his accomplice, who escaped, allegedly snatched the Toyota Corolla car with number plate GUS 15 RU from the driver at gunpoint.

The Police Public Relations Officer in the state, Abimbola Oyeyemi, said in a statement that Efosa was arrested by policemen, who laid ambush for him in the Ibafo area of the state.

Oyeyemi said the suspect was planning to escape with the stolen vehicle when men of the Ibafo Police Division received information about the car via the control room.

He said, “Men of the Ogun State Police Command on June 9, 2019, arrested one Philip Efosa, 29, with a Toyota Corolla car with number plate GUS 15 RU, which was snatched at gunpoint in Lagos.

“His arrest followed a message received from the police control room that a Toyota Corolla car was snatched by two armed men at the Eleko area of Lagos and that the robbers were heading towards the Lagos-Ibadan Expressway with the said car.

“The DPO, Ibafo Division, Abiodun Ayinde, quickly led his Anti-Robbery team to the road, where they laid ambush for the hoodlums.

“About an hour later, the vehicle was sighted by the policemen coming driving against traffic and heading towards Ibadan but was blocked by the police team. The two occupants quickly jumped out and took to their heels, but they were pursued by the policemen and one of them was apprehended, while the other escaped.

“On interrogation, the arrested suspect confessed that he and his accomplice called the driver of the car, who was using it for Uber service, to convey them to somewhere for an agreed fee before they snatched the car from him at gunpoint with the intention of taking it to Ibadan in order to sell it.”

Oyeyemi said Makama urged members of the public to report cases on time so as to ensure quick response by the police.