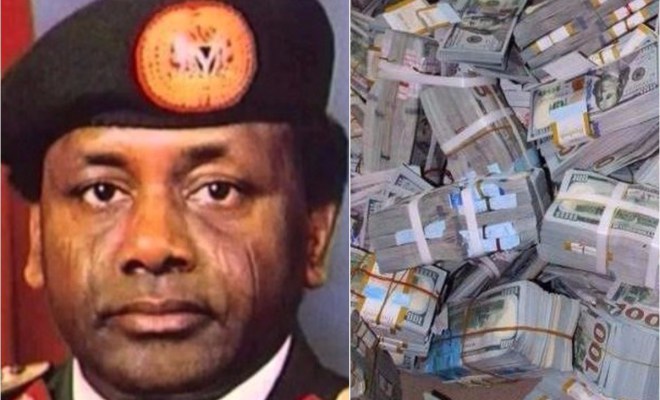 A storm of reactions by Nigerians has greeted the news that the sum of £211,000,000 (N81.9bn) laundered by former Nigerian dictator, General Sani Abacha, has been seized from a bank in Jersey, Channels Islands by a British court.

A report monitored on UK Metro by Naija News, says the money was put in accounts held in Jersey by Doraville Properties Corporation, a British Virgin Islands company.

The Newspaper noted that the government is holding on to the money until authorities in Jersey, the United States and Nigeria come to an agreement on how it should be distributed.

Abacha was a Nigerian army officer and de facto president between 1993 until his death in 1998.

Moments after the news broke, Nigerians took to the micro-blogging site, Twitter, to air their opinions on the loot.

Nimrod@GhenhisKhan
Abacha has been dropping alerts since 19teytey but @MBuhari says he didn’t steal .

But Abacha is still dropping alerts…😂😂😂

Land Investment Guru@realHopeProsper
This man may be dead but he keeps dropping alert from the land of the spirits. Give it up for Nigeria’s greatest criminal…. General Sani Abacha 👏👏👏👏👏

Comrade Deji Adeyanju@adeyanjudeji
The last Abacha loot that was recovered has been re-looted by the integrity gang. So this one won’t be an exception.

To Plan Is To Plot, To Plot Is To Conspire@TweetAtAustin
Throwback to when Abacha was ready to dissolve anything.
These days , he still solves our financial problems from the grave. A man that died in 1998 ooo!

Wale Adetona@iSlimfit
This Abacha loot is longer than River Nile. Them just dey drop am for us like album.

el magico@Mr_Okewande
Most Nigerians think of General Abacha as a corrupt man who looted public funds endlessly and they couldn’t be more wrong.
My man was a benevolent philanthropist with the gift of visions and that’s why Nigeria is steady cashing in on his post dated cheques.
A true visionary 👏👏

Joey Akan@JoeyAkan
Nigerian politicians looking at the Abacha loot and plotting how to reloot it.

Olusegun Atolagbe 🇳🇬@segun_dearest
Dear Gen. Sani Abacha,
I on behalf of other Nigerians want to appreciate you for helping us save all these monies, knowing Nigeria will one day need them.
23 years on, the loot is still flowing in like river Niger.
I don’t know why Rochas didn’t erect a statue in your honour.

Løki Odinson XIII@joespasm
No Cap..
Buh this Man was the greatest. Imagine your loot surviving you, 23 years and we’re receiving alerts from the other side.. Ma nigga Abacha

Mr. Alabi of Lagos 🇳🇬@the_Lawrenz
Abacha gets bored from time to time and decides to send Nigeria money from Hell !! Legend.

FerrariSlimBwoy@iamjuxticx
A true king!
Abacha is a legend
🙌🙌🙌

£211m recovered from the Chanels Island that Abacha looted i.e equivalent of N82b

How did he achieve such feat when it was just 20naira and 10naira?

Akpan Billy@sollo_n
I remember this story about Abacha’s wife saying no matter how much money the FG seizes from them, they can never be as poor as Dangote… It appears that statement is true afterall…

Reno Omokri@renoomokri
Yet @MBuhari said “Abacha never stole”. Are Abacha and Buhari the people Pastor Kumuyi said we shouldn’t “attack”. It‘s because we were not attacking Abacha that the bloodthirsty buffoon stole a lot and killed so many Nigerians #FreeLeahSharibu #RenosDarts https://twitter.com/lindaikeji/status/1135884850240544768?s=21 …

Ìfeoluwa@Ogo_jeez
Abacha is the most futuristic head of state we ever had in Nigeria… He steadily saved up for Nigeria’s future.
Abacha = credit alert from hell

RIQUEZA@Iyun_Olami
FG, you people can’t say you can’t give us 30k alawee o, our Man Crush has sent money to you to finance the budget…
Abacha is a legend

Dr. Dípò Awójídé@OgbeniDipo
General Sani Abacha is about to send another £211,000,000 from his loot to Nigeria. Money discovered in another foreign account. Yet, he remains a hero to millions of Nigerians.

BollyLomo@ItsBollyLomo
Abacha really the 3 eyed raven. Knew the economy was going to go shit and went ahead and kept money for us. 😩😂

Prof Ikechi Mgbeoji@MgbeojiIkechi
Time has come for us to immortalize Abacha. He stole that we may live.

Like a visionary squirrel, he stashed away the loot in dark and faraway places where the sun won’t shine on them. What a man!

femi laniyan😈@laniyanfresh
Jokes aside, this guy is a legend.anytime he’s picture pops up on social media ,just know Nigeria is getting pocket money from hell #abacha

HΞCTOR DΞ LA FUΞNTES ☬@hecxtreme
You know what???? I’m beginning to think that whenever Abacha is bored in the afterlife, he always sends Nigeria some pocket money!!!!!

Umeh and 99 others@UMEHoma
I’m tired of hearing all this ridiculous amounts Abacha stole. They will recover the money and still re-loot it again. Share this money for everyone let’s know it’s real. 😒