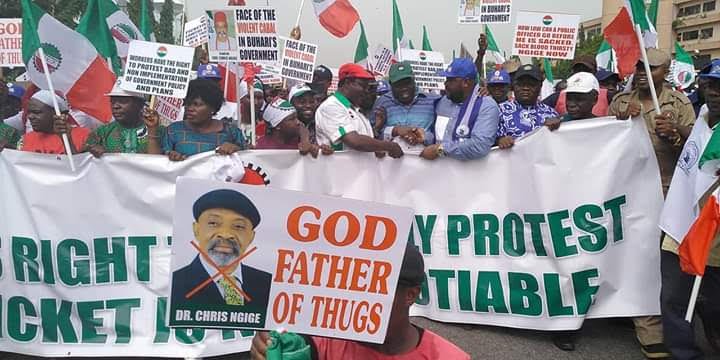 The Nigeria Labour Congress (NLC) on Monday took to the streets of Abuja to protest against the Minister of Labour, Senator Chris Ngige

NLC protest took storm the streets of Abuja in mass to protest against Senator Chris Ngige over the attack on its members by persons suspected to be hired thugs when they picketed the residence of the Minister.

At a meeting of it’s Central Working Committee on Thursday, the Congress had decided to hold what it called a national day of protest against the Minister, whom they said was no longer fit to head the Ministry having invited thugs to attack them.

The Minister has since denied knowledge of the thugs, saying he never invited them.

NLC President, Comrade Ayuba Wabba said the protest has nothing to do with the NSITF board but to protest against the action of the Minister.