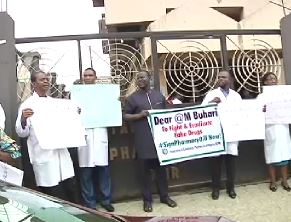 The Association of Community Pharmacists of Nigeria has called on President Muhammadu Buhari to assent to the Pharmacy Bill, already passed by the National Assembly.

According to them, the bill when signed into law, will sanitise the pharmaceutical industry in the country.

Ayodeji Moradeyo reports that members of the Association of Community Pharmacists of Nigeria, ACPN began the protest by shutting major pharmaceutical stores in Akure, the Ondo State capital.

The stores were shut for two hours to call government’s attention to the need to sign the Pharmacy Bill into law. It was followed by a protest by a handful of pharmacists in the state.

Armed with placards of various inscriptions, they say the current drug distribution network is chaotic, hence the need for President Muhammadu Buhari to sign the bill into law.

Led by the State Secretary of the Association, Femi Obateru, they said signing of the bill into law is long over due. They also believe that the war against drug abuse can be won, if the bill is signed into law.

Both chambers of the National Assembly had in 2017, passed the bill.