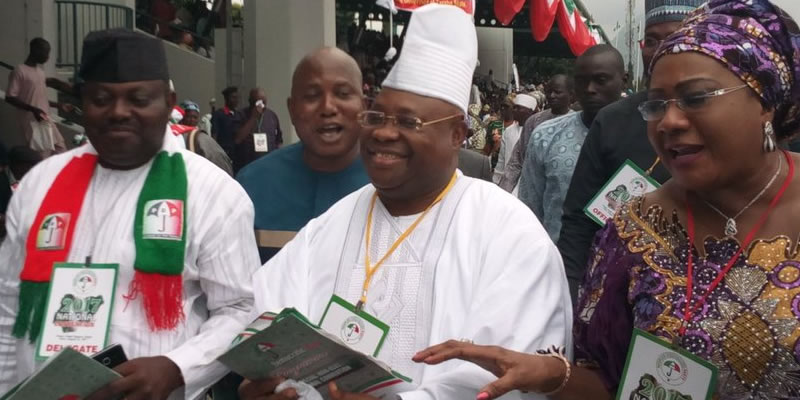 Peoples Democratic Party (PDP) has claimed that there is a plot by the ruling All Progressives Congress (APC) to arrest its candidate in the 2018 Osun governorship election, Senator Ademola Adeleke.

In a statement signed by the party’s spokesman Kola Ologbondiyan late on Sunday, May 5, the party claimed that the APC wants to use security agents to detain the lawmaker. The PDP said it has learned of a fresh plot by the APC “to use some elements in the Police to hound and incarcerate our victorious Osun state governorship candidate, Senator Ademola Adeleke, all in the bid to browbeat him to relinquish his mandate.”

The PDP said there are increasing numbers of threats daily to Senator Adeleke’s life from those who allegedly do not want him to take over as Osun state governor, following a ruling by the Osun State Governorship Election Tribunal.

Below is the full statement as put out by Kola Ologbondiyan on behalf of the PDP.

“The Peoples Democratic Party (PDP) alerts of a fresh plot by the All Progressives Congress (APC) to use some elements in the Police to hound and incarcerate our victorious Osun state governorship candidate, Senator Ademola Adeleke, all in the bid to browbeat him to relinquish his mandate.

The PDP already has new information of how the APC, having seen that there is no way it can stop Senator Adeleke at the courts, now seeks to forcefully hound him into a police station where he will be incarcerated and put out of circulation before the determination of the matters in court.

Apart from executing this script of the APC, these elements in the police have no other reason for continuously hounding Senator Adeleke, as he is already in court for all the frivolous allegations preferred against him. If they truly want Senator Adeleke for any new issue connected with the charges for which he is already in court, it should present such before the court instead of resorting to bullying.

Nigerians will recall that the PDP had earlier alerted of threats to Senator Adeleke’s life. These threats have not only continued unabated but have heightened with this renewed hounding by these elements in the police, who are being used by the APC.

Our party cautions that Nigerians are not ready to accept any excuse from anybody should Senator Adeleke suddenly becomes a victim of accidental discharge, sudden disappearance or failing health. They know who to hold responsible.

The APC should end this siege on Senator Adeleke and accept the fact that he has the mandate of the people of Osun state as their governor and no form of machination will subvert this reality.

The PDP, therefore, charges the Inspector General of Police, Adamu Mohammed to rein-in his men on issues related to Senator Adeleke’s determination to retrieve his governorship mandate, which was stolen by the APC.”