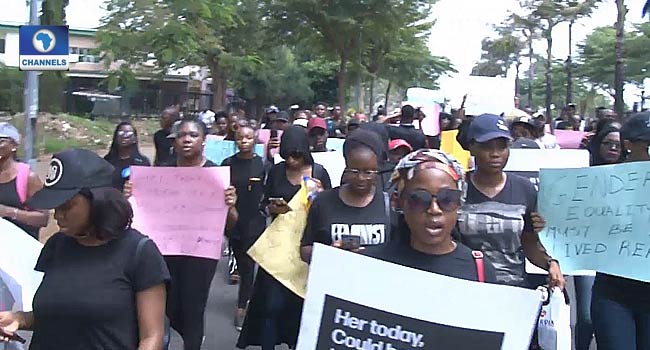 Some protesters on Saturday stormed the Federal Capital Territory (FCT) police command at Garki over the alleged illegal arrest, detention and rape of some women for alleged prostitution.

The protesters on Saturday marched the streets of Abuja clad in black outfits and carrying various placards.

The protesters demand that police authority should look into the allegations of rape against it’s officers who over the past weeks raided some night clubs in Abuja and arrested hundreds of women suspected to be prostitutes.

An activist, Aisha Yesufu, who was part of the protesters said the role of the police is to protect and not assault the citizenry.

“You are supposed to be the ones protecting us and you are raping us. You are beating us up, you are carrying guns. You see us here, we are tired. We are saying, enough.

“I have a choice to wear whatever it is I want to wear,” she said.

“When the information got to him (the police commissioner), he reached the complainants under the umbrella body of women lawyers and they met with him.

“I want to assure you that the perpetrators of this act will be fished out and they will be punished,” he said.

Prostitution is regarded as illegal in the Federal Capital Territory.