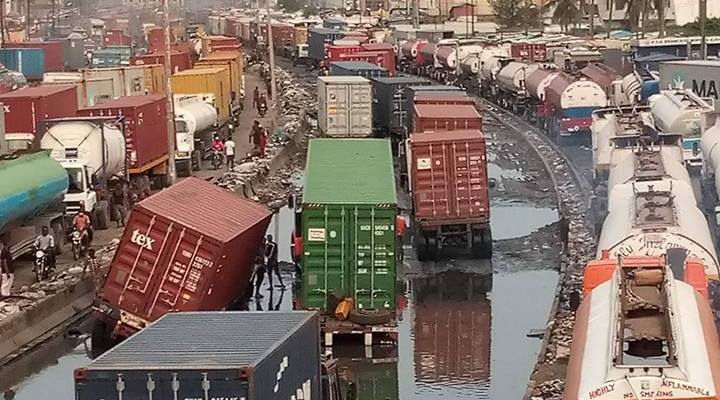 The Senate Committee on Works has said plans are underway to invite the Nigeria Ports Authority (NPA) in the coming week over lingering Apapa gridlock.

The Chairman of the committee, Sen. Kabiru Gaya, made this known in a meeting with the management of APM Terminals in Abuja on Thursday.

He further said NIMASA, farm tank owners, manufacturers and other relevant stakeholders have been invited to attend the meeting aimed at finding a lasting solution to the problem.

Gaya who said the challenge had become an embarrassment to the country, noted that only concerted efforts would bring about a lasting solution.

“We are expanding the committee to include, Senate Committee on Marine Transport and by next week, we will invite NPA and NIMASA to take a holistic look at the matter.

“We will also invite all owners of terminals, manufacturers, tank farm owners and other stakeholders to the meeting.

“We cannot wait for one person to find a solution to the problem. We have to work together as a team,” he said.

He expressed concern that unlike in the past, where terminal operators cleared up to 750 containers a day, “today, with less business, some of the few containers brought to the terminal for clearing spend close to three weeks.”

He further decried that in some situations, before containers arrived at the terminals. the ships had departed, adding that many exporters lost millions of Naira in the process.

The lawmaker said corruption was one of the major factors responsible for the problem.

He said, “we have to change the system. Nigeria has to be out of this kind of problem. We need to fight corruption and ensure that the common man gets what he needs to get.”

“The most worrisome is that when containers are delayed at the port, the exporters pay more.

”It is unfortunate that some Nigerians who do not want the progress of this country are benefitting so much from this.

“That is corruption. We just have to fight it and I agree with what President Muhammadu Buhari said that we have to fight corruption else it will kill the country,” he said.

Gaya, expressed optimism that the trailer park currently under construction in Lagos would soon be completed.

He added that it would commence operation, everything being equal in June, stressing that it would help ease congestion while bringing succour to motorists.

On the meeting with APM, Gaya said it was a followup on recent oversight embarked upon by the committee to Lagos on the gridlock.

He said APM terminals operators have made their presentation and submitted relevant documents as requested by the committee for scrutiny.

He noted that the company would be expected in next week’s meeting, to help proffer solution to the problem.

Earlier, the Managing Director of APM Terminal, Mr Martins Jacob, said the problem was multifaceted, adding that unless it was tackled holistically, no significant impact would be made.

He said one of the major challenges was lack of access roads.

Jacob said the bad road condition and the absence of an efficient traffic management system were part of the problem.

He also said that issues such as identifying and allowing only truckers with valid transactions into the port area as well as monitoring and removing idling or broken down trucks from the ports access roads were a challenge.

“Poor state of trucks coming to the port which makes it difficult to service them, cause a number of breakdowns affecting the terminal operations.

“Fatigue on the part of the drivers after the long wait on the port access road also has potentials to cause an accident leading to more gridlock,” he said.

The managing director stressed that “absence of pre-advised information of container visit through the state to the quay” was also a major challenge that needed to be tackled.

On allegations that the company contributed to the problem by resorting to the manual system in clearing containers, the managing director said it was not true.

He said the company’s clearance system was fully automated, adding that it only resorted to manual for only about two hours, some weeks ago when they had minor challenges.

He added that, “sometimes we stop transaction when the outbound traffic is not moving.”

APM Terminals is a company that designs, builds and operates port and terminal facilities.

It also provides cargo Inland Services for cargo transportation between port facilities and inland locations, as well as other associated cargo handling functions.