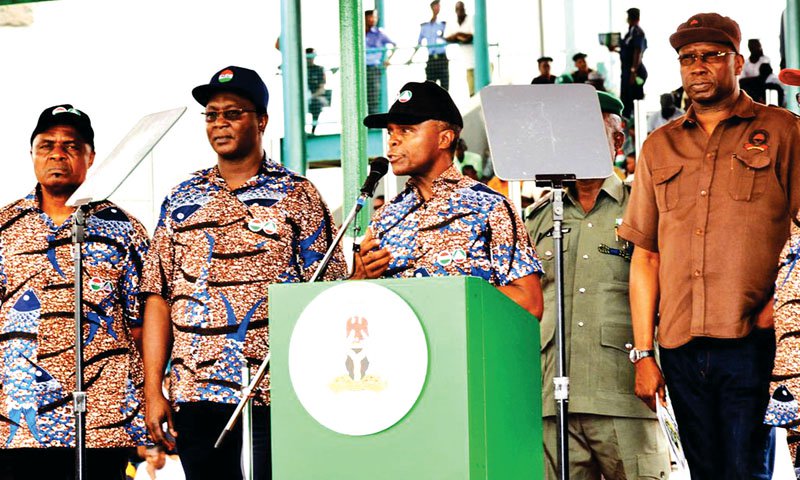 Years after it was privatised, the power sector has failed to deliver the desired result, the Federal Government said yesterday.

Vice President Yemi Osinbajo, who delivered the verdict, spoke of other options to re-engineer the sector for effective power supply to meet domestic and industrial needs of Nigerians. He was not specific on the options.

Prof Osinbajo laid it bare in his May Day address to workers at the Eagle Square in Abuja. He said the government was not happy that several years after the sector was privatised, it has failed to deliver.

The Power Holding Company of Nigeria (PHCN) Plc. was unbundled in 2013 during the administration of Dr. Goodluck Jonathan. It was to allow for private sector involvement in the generation and distribution of power.

The vice president, who represented President Muhammadu Buhari, said the government was “strongly committed to changing the narratives” in the power sector.

He said: “Today, that sector, after it was privatised, still remains stalled in delivering power to many Nigerian homes and businesses.

“We must act as a matter of national importance and we are committed to doing so, to work and re-engineer the sector for much more effective performance. Workers shall be called upon to play a greater role in supporting the government to attain all these goals.”

Osinbajo, who also told the workers that the new minimum wage would be fully implemented by the Buhari administration, however, expressed concern over incessant strikes by workers as a means of resolving industrial disputes.

He said the nation was losing so much in terms of resources and manpower to job boycotts.

The vice president said: “Industrial peace is central to economic stability. Every industrial disruption cost the national economy very dearly in terms of money and manpower that are lost.

“It is for this reason that I urged all actors in the industrial relations system to be circumspect and ethical in the use of industrial action as tools for resolving work place crisis. Industrial actions, because of the huge economic and social cost, should be the last and not the first option for resolving disputes.”

Osinbajo, who was silent on the crisis between Labour & Employment Minister Chris Ngige and organised Labour over the change in the chairmanship of the Nigerian Social Insurance Trust Fund (NSITF), however, assured workers that President Buhari will reciprocate the renewed mandate given to him by the electorate by ensuring prompt delivery on his electoral promises.

He said: “At the just concluded general elections, Nigerians and indeed Nigerian workers gave our administration another mandate to govern them. We shall reciprocate this electoral gesture by focusing on the critical issues that will advance and improve the quality of the lives and livelihood of Nigerians.

“These include the building of infrastructure, such as roads, rail, hydroelectricity and revaluing all sectors of the national economy in order to put our country on the path of a sustainable economic growth and prosperity.”

Osinbajo said the Buhari administration remained strongly committed to the goals of the International Labour Organisation (ILO) movement, adding that “on assumption of office in 2015, in spite of daunting economic challenges which confronted us at the time, we ensured that no worker was retrenched across the country.

“We followed this commitment by providing bailout funds for states that were unable to pay salaries at that time in order to pay their accumulated arrears. He also released Paris Club refund owed since 2005 to make sure that workers were not owed anything.

“We also ensure the payment of outstanding benefits of retrenched workers. Retrenched Nigeria Airways workers who were owed for decades were paid. We also ensured that the Pensions Transitional Arrangement Directorate (PTAD) also paid arrears owed to parastatals, civil servants pensioners covering about 101, 393 civil service pensioners in all grade levels and 76,310 parastatal pensioners across 186 ministries, departments and agencies. This is in addition to the arrears that were paid to officers of the Police, Customs and Immigration.

“The administration also settled pension issues of the Armed Forces and paramilitary personnel who were dismissed as a result of their participation in the civil war. All these veterans have now been paid their outstanding benefits.

“Our Social Investment Programme (SIP) is the largest of its kind in Africa and it is directed at ensuring that we are able to provide opportunity in both the formal and informal sectors of the economy. The largest numbers of workers are in the informal sector. These comrades of ours deserve the protection of our labour laws.

“The choice of the theme for this May Day is not just a headline… we truly believe that Nigerian citizens, especially those at the bottom of the pyramid, must be the central focus of all economic planning and budgeting.

“The welfare and wellbeing of all these Nigerians, who work every day, rendering services, is the true benchmark of our commitment as a government and as a people who believe in social justice and the dignity of all Nigerians. We will continue to commit ourselves to the course of improving the lot of all Nigerians by providing for those who cannot work.

“In line with that, the new national minimum wage, which Mr. President signed into law a few days ago, shall be fully implemented by the current administration. Let me again express my deep appreciation to the leadership of Nigerian workers for the understanding and maturity shown during and after the negotiation for the new minimum wage.

“We shall continue to provide the enabling environment for higher productivity as well as industrial peace and harmony as well as a congenial atmosphere for collective bargaining among trade unions and their employers while also protecting the fundamental right and all other rights of Nigerian people and people at work.”

On the celebration of Workers’ Day, the vice president said: “This Year’s International Workers Day, otherwise known as the May Day, is coming on the heels of the centenary celebration of the ILO. These two events have far reaching significance for workers in particular and for the world of work in general.

“One defines and regulates the world of work through the international labour standard and the other establishes the protection of the fundamental rights and dignity of the working people. These events have over the years defined employment relations globally.

“Another uniqueness of this year’s international labour celebration is that the ILO, as part of its arrangement towards the celebration of its centenary, gave member states the opportunity to select their country’s themes in the spirit of the centenary.

“It is in recognition of this that our country chooses the theme for this year’s May Day celebration as ‘Another 100 years of struggle for jobs, dignity and social justice in Nigeria’.

“You may recall that at the attainment of independence, we became a member of the ILO. The early decision to join the ILO was predicated on the strong conviction that the ILO and its labour standards formulated since its inception are aimed at promoting decent and productive work under the condition of freedom, equity, security and dignity and building a virile workforce which our country needed for socio-economic development.

“It is for this reason that the centenary celebration of the ILO is sentimental to us as a nation and for workers. It is important for me to state here that the ILO has over the years supported our country in the development and implementation of labour related policies.

“Recently, the ILO collaborated with Nigeria in its affirmation as a pathfinder country on the elimination of child labour, false labour, modern slavery and human trafficking. Pathfinder countries are pioneer countries who have decided to pool resources together and channel the same towards the achievement of the Sustainable Development Goals (SDGs).

“We shall ask and request the ILO to further support those ILO conventions on Labour legislations and policies that govern employment and employment relations and good conduct as well as industrial relations in general.

“I am optimistic that we shall continue to leverage on this collaboration to further strenghten our legislation in consonance with international best practices and foster stronger ties among social partners in the coming years.

“I am also convinced that the selection of the theme shows the level of our collective commitment to job creation, the protection of the rights of workers, their dignity and also promote social justice in our country as contained in the various provision of our constitution. Today’s event will provide us the opportunity to reflect on our commitment to these goals.

“As we join others in celebrating the 2019 international Workers’ Day, and the centenary celebration of the ILO, let me commend your resilience, tenacity and sacrifice as well as commitment in standing up against every form of oppression, exploitation, unfair labour practices and injustices as well as the violation of the fundamental rights of the working people of this country and the world over.

“I also thank you for the support you gave our administration in its first tenure and I seek for further support and cooperation of all our working people to help build a country where our young people will be gainfully employed, there will be security of work and tenure for them and they will be ensured of the protection of their fundamental rights.”