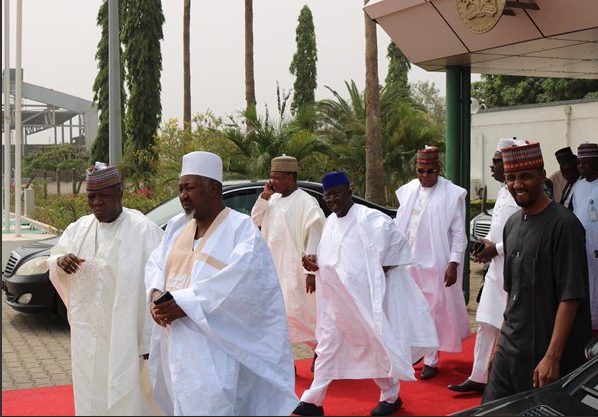 The Nigeria Governors Forum (NGF) has expressed displeasure at journalists over the way they reported the looming recession warning by the Chairman of the forum and Zamfara State Governor Abdulaziz Yari.

The governor, on Monday, had warned that another round of recession could occur in the middle of 2020.

The warning, which generated a lot of backlash for the governor, did not go down well with the forum, it was learnt.

Consequently, reporters assigned to cover the induction for newly-elected and returning governors were barred from entering the venue on the second day.

But the ban was not extended to the Nigerian Television Authority (NTA) whose crew were allowed into the conference centre. Yari, in his opening remarks on Monday, warned incoming governors to be prepared for the possibility of another cycle of recession by the mid-2020 to the third quarter of 2021.

The NGF chairman, who was preparing the minds of the governors, especially the newly elected ones on the challenges ahead, noted that while the crude oil price was over $100 from 2011 to 2015, the price nosedived to less than 75 per cent from 2015, leading to recession.

He said: “On our part, we made a lot of achievements in infrastructural development and provision of social services because we enjoyed a relatively high oil price of about $100 to $114 per barrel between 2001 and the middle of 2014. However, by the mid-2014, the price of crude oil, which is sadly the main driving force of government’s expenditure, dropped to $75 per barrel. It, therefore, became very difficult for many states to even pay salaries of their workers.

“This scenario is a wake-up call for all of you to come amply prepared to face these kinds of challenges, especially since we are expecting the possibility of another cycle of recession by mid-2020 and which may last up to the third quarter of 2021. Your good spirit of stewardship will make you contain the situation should there be one.”

“Also, as members of the National Economic Council, you must work hand-in-hand to boost the economy in tandem with the global best practices.”

There was no official statement on why reporters were barred from further coverage of the event; not even the forum’s spokesperson Abdulrazaq Barkindo was able to answer questions from agitated reporters.

Barkindo, who dismissed the suggestion that the directive came from the NGF, explained that the security officials took the decision without recourse to the forum.

He also said efforts to reverse the decision had failed.