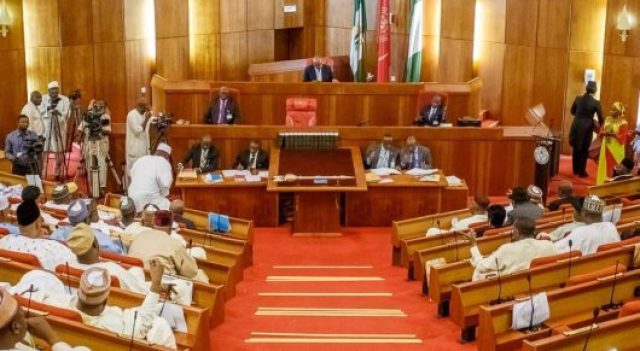 The Nigerian Senate on Thursday reaffirmed its commitment to the non-sale of the National Theatre, Tafawa Balewa Square and other national monuments by the Federal Government led by President Muhammadu Buhari.

The affirmation is a sequel to the adoption of the report of its Committee on Culture and Tourism at plenary on Thursday.

The chairman of the committee, Sen. Fatimat Raji-Rasaki, who presented the report, said the committee was instructed to examine monuments across the country and report back.

Raji-Rasaki said the committee travelled to Lagos and other parts of the country to assess the monuments and recommends that given their historic and monetary value; they should not be sold.

According to her, the committee came to a conclusion that some other monuments, which were hitherto not recognised as national monuments should be given that status.

Her words: “Senate debated motion on proposed sale of the National Theatre and Tafawa Balewa Square and mandated the committee to work on it and report to back.

“This followed the motion I moved on Dec. 20, 2017, on Federal Government’s plan to sell the monuments.

“The Tafawa Balewa Square was instrumental to our history and the National Theatre was built for all blacks gathered to gather to celebrate the uniqueness of the black race.

“The committee travelled to all the locations of all the monuments across the country and has concluded work on 32 edifices. Eight natural sites and four technological edifices,” she said.

Contributing, the senator representing Kaduna central at the Nigerian Senate, Shehu Sani, said the monuments were important to Nigeria’s history and should not be sold off.

Senator Sani added that selling them off would be a great mistake as the historic identity attached to them would be erased, while generations to come would not have any sense of Nigeria’s history.

“When we travel to other countries we visit historic monuments and adding to revenue generation in those countries.

“It, therefore, behoves on us to keep ours for visitors to have where visit and for generations unborn to have a sense of our history.

“I visited Benin Republic monuments and the Slave Castle in Ghana among other countries and I saw how much they generate from them,” he said.

Senator Sani urged parents to take their wards to historic places to teach them the country’s history rather than just visiting eateries and amusement parks.

The Kaduna lawmaker advocated that rather than selling them, the country should find a way of funding and maintaining them.

In the same vein, Sen. Yusuf Yusuf(APC-Taraba), said since the position of the Senate is not to sell them, workable strategies needed to be evolved to manage them properly.

“Selling may not be the best option but what do we do. I hear the square is under concession but is not well managed,” he said.

In his remarks, Ike Ekweremadu, the Deputy President of the Senate, who presided over plenary, said the monuments should be maintained rather than being sold off.

“We need to maintain them and try a structured concession. There is no gainsaying the fact that monuments should be maintained to be part of our history.

“Some other ones should be identified in the course of time and as we evolve as a country to be named as national monuments,” he added.