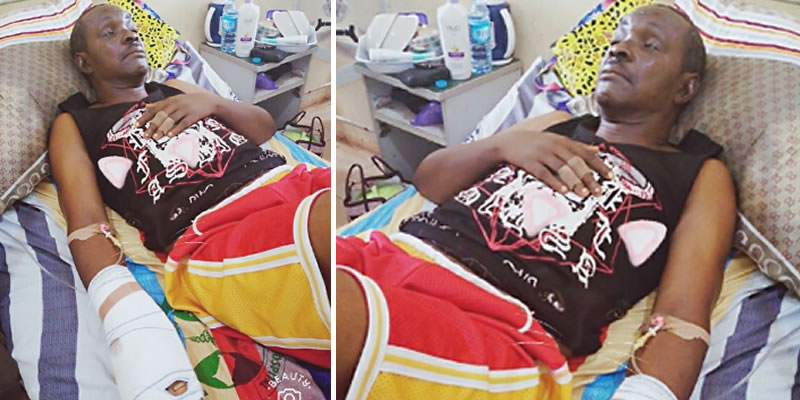 The gunmen however did not spare her husband, Paul Owoseeni, as they chopped off his five fingers from his left hand because he prevented them from killing her.

Narrating her ordeal to newsmen, Mrs Owoseeni who served as the Caretaker Chairman of Ikole Council area and was also the Women leader of the All Progressives Congress(APC) in the state, said the gunmen numbering about seven, stormed her house along Ikole road at about 8.30pm and turn off the generating set outside , throwing the well- lit environment into total blackout.

She believes the attack was politically motivated by those, whom identity she had already revealed to the police during their visit to the scene of the incident around 11pm on the day the attack occurred. She said, aside from her husband, two students living in the building were also attacked with cutlass and iron rod.

“When the light went off, we suspected that the generating set was still running outside and we asked those students living with us to go out and check what was happening. Few minutes later, we heard them saying please save us, save us and my husband who was not with torch light rushed out to see what was happening. The impression we first heard was a case of electrocution. While my husband rushed out to save the situation, I tried to get my torchlight to be able to see clearly.

Shortly, the voices changed and I started hearing thief, thief, thief but my husband was already in their midst with those children. But because I went with torchlight, I was able to see them and I had to rush back inside and hid myself somewhere. They brought my husband inside and started asking, where is your wife? We are here for her and not you. When he didn’t give them where I was, they started macheting him with dangerous weapons and they did that until they chopped up his fingers and they fled when they saw that he had passed out”, she stated.

Mr Owoseeni was rushed to the state General hospital where he was stabilized before he was referred to Ekiti State University Teaching Hospital(EKSUTH) for intensive medicare.

“From EKSUTH, we were referred to Federal Teaching Hospital , Ido Ekiti and now we are in a private hospital in Abuja, where my husband is receiving treatment. I see no reason why someone would want to kill me for raising my voice against injustice in the running of our party. I had given the names of those I suspected to the police for investigation”, she said.

Mrs Owoseeni said the police has been informed and investigations into the matter has commenced.