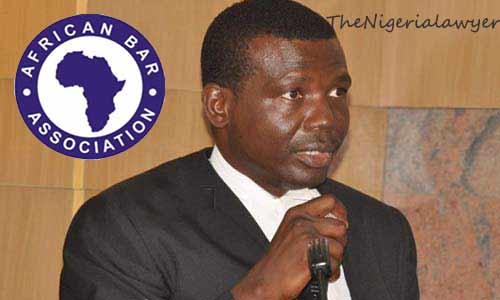 The African Bar Association (AFBA) has condemned the killing of Citizen Godwin by men of the Nigeria Customs Service around Sagamu area, Ogun State Nigeria, on February 17, 2019. In the video of the shooting that trended on the social media, the lifeless body of the deceased could be seen on the ground, with blood around the neck areas.

In its official response, the Customs Service claimed to be preventing anti-smuggling, leading to accidental discharge. It claimed that the victim is an errand boy who served Customs officers when they retire home.

Reacting to the tragedy, the Justice Sector Reform Commission of AFBA said: “Whether as an errand boy or a traveler, the victim did not deserve to die by summary execution, as has happened in this case.

“AFBA recalls that Nigeria is a signatory to the African Charter on Human and People’s Rights, which has been domesticated as part of its municipal laws and recognized by the Supreme Court of Nigeria as an enforceable legislation.”

The statement signed by the commission’s Chairman, Ebun-Olu Adegboruwa, noted that Article 4 of the African Charter provides as follows: “Human beings are inviolable. Every human being shall be entitled to respect for his life and the integrity of his person. No one may be arbitrarily deprived of this right.”

The statement further said: “The shooting of Citizen Godwin by the Customs men amounts to summary execution and it is a cause for worry, especially in a country where the misuse of firearms by security personnel has been on the increase.

“AFBA urges a thorough investigation of this event by the government of Nigeria and the African Union, and if there is an established violation of the African Charter or any other municipal legislation by this misconduct, it should be addressed squarely and the perpetrators brought to justice. In this regard, AFBA will inaugurate an independent Commission of Inquiry into this incidence where the Nigerian government fails to act decisively.

“The narratives of the Customs on this unfortunate occurrence raised too many ambiguities and posed more questions than answers, given the graphic video recording of the event, the venue of the incident and the sequence of occurrences.

“Human life should be precious to all security agencies bearing arms and government owes it as a sacred responsibility to properly train and educate all security personnel on the rules of engagement in relation to the use of arms in non-combat situations, in order to minimize casualties to innocent civilians.”