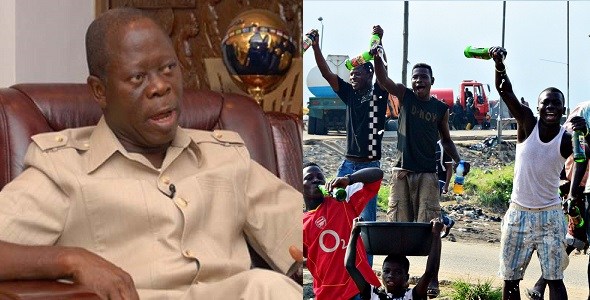 At the presidential rally in Lagos today, National Chairman of the All Progressives Congress (APC), Adams Oshiomhole said when he was President of the Nigeria Labour Congress (NLC), he didn’t find it difficult to mobilise ‘area boys’ in Lagos for protests.

He made this remarks during the APC presidential rally held at the Teslim Balogun Stadium on Saturday. According to Oshiomhole, the 16 years the Peoples Democratic Party (PDP) spent in power brought poverty. He also compared PDP to “barren women” tagged as “witches”, who Nigerians should “divorce”

In his words: “I don’t think there is anything new to be said in terms of giving you report of the performance of President Muhammadu Buhari over the past three and a half years. I think that has been eloquently done by Comrade Fashola, both in Yoruba, in English and probably some Latin in-between. And of course, Governor Emeritus, our National Leader, Comrade Asiwaju ‘Jagaban’ Tinubu, has also elaborated where Lagos was.

“The first quarrel I had with Asiwaju, and later, I extended it to Fashola, was that when I was President of the Nigeria Labour Congress, I didn’t have difficulties mobilising area boys under the bridge of Ojuelegba. Once we get them out, we block the bourgeoisie of Eko, Victoria Island, and other parts of the state.

“Those who know what Lagos was before Bola became the Governor, and later Fashola, now Ambode, and by the grace of God, Sanwo-Olu is coming to continue from where they stopped, will see the beauty when a state and a people are united and [bound] together by sheer commitment to embark on sustainable growth and development.”

Condemning the Peoples Democratic Party (PDP), he continued: “My comrades, if you marry a woman for 16 years, no pikin, and even your brothers and sisters are dying and they say she’s a witch, and you divorce her; you marry another one, and in three and a half years, ‘he’ delivers on rail, power, giving Trader Moni, giving pensioners money, paying Biafran pensioners that have been forgotten, doing N-Power, creating jobs, infrastructure, why will any man or woman suggest the old [party] that for 16 years delivered poverty, corruption, mismanagement; why will you bring them back?”