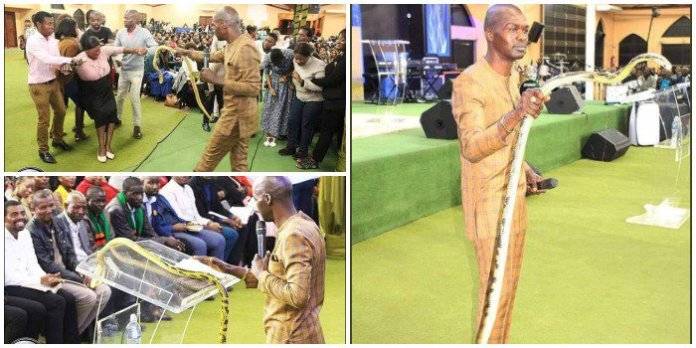 These days, people have begun to mistake extremism for religion. In other to prove the power of God, some clerics go to the extreme by putting some of their followers into serious danger.

Due to this believe in faith, many of the followers fall victim and become scapegoats in the men of God’s so called miracle.

Legit had earlier reported the story of a lady who died after pastor advised her to drink holy water instead of using the tablets prescribed by the hospital. The woman had been HIV positive.

Here is another story about a pastor using snake to do deliverance. A young man identified simply as Zwide on Twitter shared the photos of the pastor holding the snake at the altar of his church.

In one of the photos, the pastor could be seen trying to put the snake on a woman who was being held by a few members of his church.

Looking closely at the photo, it could be assumed that the woman was trying to move away from the snake.

Twitter users reacted to the story. Some of them were furious that the congregation could not denounce the pastor for bringing a dangerous animal into the church.

Others expressed that they know people who attend the pastor church and are very devoted to him.