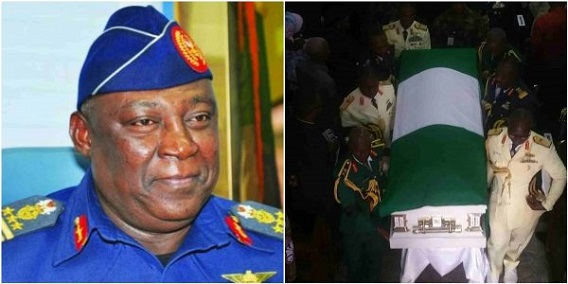 Former Chief of Defence Staff, Air Chief Marshal Alex Badeh, has been buried in Abuja. He was buried at the military cemetery in Abuja on Wednesday.

Badeh was shot dead along the Abuja-Keffi road while returning from his farm on December 18, 2018.

A statement by the Nasarawa State Police Command said: “The former CDS suffered gunshot injury which resulted to his death,while his driver was injured and the said friend abducted.

“The corpse of the late Air Chief Marshal and the injured driver have been taken to Nigerian Air Force (NAF) Hospital, Abuja.”

The statement confirmed that the probe of the incident was ongoing with the visit to scene of the murder by the Commissioner of Police in Nasarawa State Yahaya Bello and some senior military personnel.