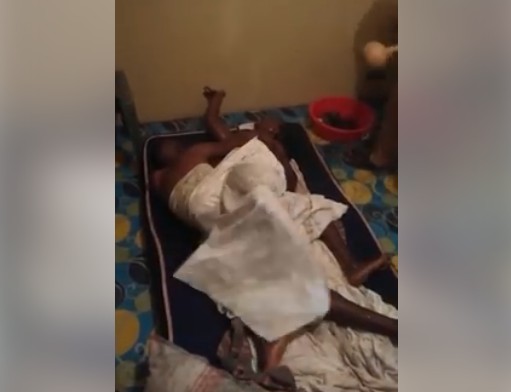 A man got stuck while having sex with a married woman, according to an online report.

A native doctor had to be invited to perform some ritual on the pair after they secret was brought to light in a dramatic way.

In a viral video posted by Tonny, a Facebook user who hails from Kenya, the woman can be seen writhing in pains on the bed as the native doctor performed the ritual.

The couple were covered up with a blanket while the drama was going on even as people entered the room to film them.

This is not the first time such incident has happened in Kenya.

A husband accused of cheating was ‘caught’ after becoming stuck inside his lover while they were having sex in a hotel room in Kenya.

Guests at the hotel in Kitale town, Trans-Nzoia County, heard screams coming from one of the rooms and raised the alarm.

On arrival police reportedly found the couple ‘stuck together’ and doctors had to be called in to free them.