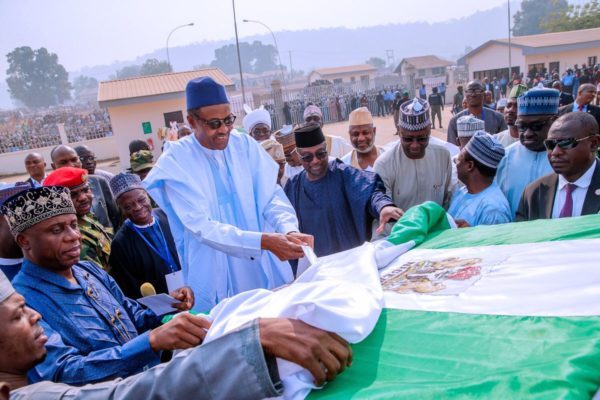 The contract for the inland port, valued at N6billion, was originally awarded in 2011/12 but was abandoned until Buhari’s government forged ahead to deliver it.

President Buhari, who commissioned the port during his campaign rally in Niger State, said the Port, when fully operational, would relieve Lagos Port of a lot of pressures in terms of traffic gridlocks and congestion. He added that his administration was committed to developing critical infrastructure such as the Baro Port to engage the youths.

The president promised to construct a rail line from Ibadan through Minna to Kaduna and Kano so as to link the newly commissioned Baro Port, as well as a standard gauge line linking Minna to Abuja. He also stated that the reconstruction of Minna –Suleja and Bida –Lambata roads were ongoing, while construction work would soon start on Mokwa-Tegina-Kaduna, Kontagora-Bokani and New Bussa-Kaiama roads Buhari said that if re-elected, he would improve the facilities at the port and construct a dual carriage road from Baro to Abuja, while also reactivating the rail lines from Baro to Minna.

He declared that Niger State was dear to his heart, pointing out that ongoing projects would be completed while new ones would be initiated in his second tenure. In his speech, the governor stated that the entire people of the state, particularly Baro community, were happy at the project, saying it would improve the economic prospects of the local community, the state and the country in general.

On his part, the minister of Transport, Rotimi Amechi, said the project was in compliance with the directive of the president that all his cabinet members should ensure that all projects under their ministries were completed.

The managing director, National Inland Waterways Authority (NIWA), Sen. Olorunimbe Mamora, disclosed that it was President Muhammadu Buhari that had developed the master plan of all Inland Waterways in the country, including the Baro Port, when he was Petroleum Trust Fund (PTF) boss.

He noted that the present administration vigorously pursued the completion of the Baro Port, which was abandoned by previous administrations. The General Manager in charge of Corporate Affairs, NIWA, Tayo Fadile, , said the new port was fitted with a mobile harbour crane, transit shed and an administrative block. “It is also equipped with facilities such as water hydrant system, water treatment plant, reach stacker, 100KVA power generating set and three forklifts of various tonnages, among others.

“Baro Port is one of the river ports being built by the federal government to support the dredging of the Lower River Niger project. It is expected to create at least 2,000 direct jobs and hundreds of thousands indirect jobs. “It will help keep off the road several heavy duty trailers and trucks, thereby extending the life span of our roads,’’ Fadile said in a statement. He said that NIWA had started upgrading the road network linking the port.