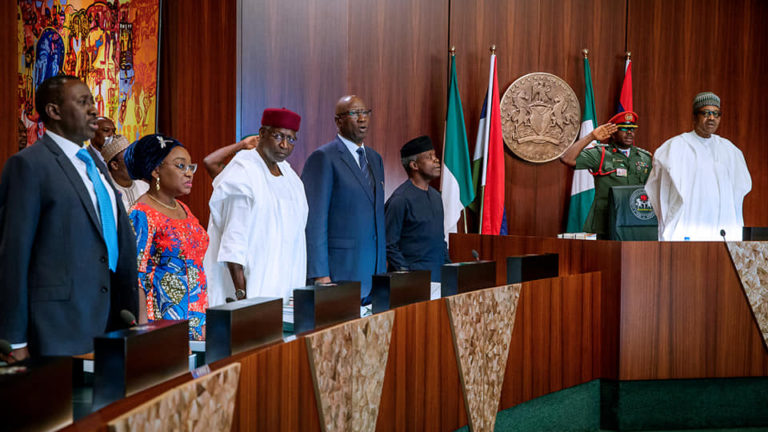 The Federal Executive Council (FEC) has approved the 2019 budget proposal.

The approval was granted at Friday’s special session presided over by President Muhammadu Buhari.

The meeting which started at 10:30 am at the Presidential Villa, ended at 1 pm

Briefing State House correspondents at the end of FEC meeting, the Minister of Budget and Planning, Udoma Udoma, said that the council would liaise with the National Assembly to determine when the president would submit the draft estimates for the consideration of the two legislative chambers.

He, however, did not give details of the proposal, noting that the Nigerian Constitution only allows the president to give out the details and he would do so when the National Assembly was ready to receive the draft.

The FEC had on October 24, approved the Medium Term Expenditure Framework (MTEF) and Fiscal Strategy Paper (FSP) for the 2019 -2021 to provide a template for the 2019 budget.

The session which was presided over by President Buhari approved a budget estimate of N8.73tr for the 2019 budget, N400bn less than last that of this year.

It would be recalled that Udoma had last month announced that the Federal government was considering a leaner 2019 budget of N8.6 trillion, a figure less than the N9.1 trillion approved by the lawmakers for the 2018 budget.

READ  LASG Seals Off Plastic Company Over Death Of Worker

Udoma added that N305 was proposed as exchange rate to the dollar, with government working to keep inflation down after slight increases in the last two months on the heels of 18 months consecutive decline.

Udoma noted that based on the oil price and oil production assumptions, government expected to generate about N3.6 trillion from oil, up by about N500 billion from last year’s figure.

He said that about N6.9 trillion revenue was projected would be available to the budget in 2019.

He said that with other projections, government expects to collect less revenue from some independent sources, adding that only about N624 billion was expected to be realised, contrary to N847 billion in the 2018 budget.