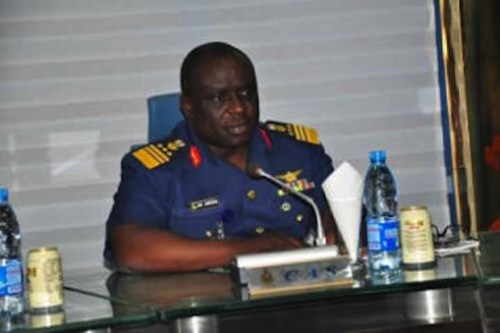 A Federal High Court in Lagos, on Monday, adjourned judgment in a motion, seeking final forfeiture of N2.2 billion recovered from a former Chief of Air Staff, Adesola Amosu.

The suit which was earlier fixed for judgment on Monday was further adjourned following the absence of Justice Mojisola Olatoregun, who is said to be attending a seminar

A new date would be communicated to the parties.

NAN reports that the court had issued an interim order of forfeiture of the sum, on June 14 following an ‘exparte’ motion filed by the Economic and Financial Crimes Commission (EFCC).

An exparte application is filed by a party against another without the latter being present to defend itself in court.

Joined as respondents in the suit are Mr Amosu and a company, Solomon Enterprises Ltd.

The commission had argued that the sums were reasonably suspected to be proceeds of unlawful activities.

The court had further ordered a temporary forfeiture of N101 million recovered from Solomon Enterprises, a company linked to Mr Amosu.

The judge had then directed the EFCC to publish the interim orders in two national dailies, for the respondents or any interested party to show the reason why a final order of forfeiture should not be made.

On November 12, Rotimi Oyedepo who appeared for the EFCC had moved his motion for final forfeiture of the money,

On the other hand, Norrison Quakers, who appeared for an interested party in the suit (Jacob Adigun), and Bolaji Ayorinde who appeared for the respondents, had respectively moved their various applications before the court.

After listening to the respective counsel, Mr Olatoregun then adjourned for judgment.

In a counter affidavit deposed to by an EFCC operative, Mr Danladi, the commission alleged that while in office, the respondents diverted huge sums of money from the Nigerian air force accounts, to purchase properties both within and outside the country.

He said that Mr Amosu who was appointed Chief of Staff on January 16, 2014, had in the course of his service, received budgetary provisions in the sum of N4.5 billion, from Patrick Akpobolokemi, the then Director General of the Nigerian Maritime Administration and Safety Agency (NIMASA).

The sum was said to be for Maritime Security Support, pursuant to a Memorandum of Understanding (MOU) between the Nigerian Air Force and NIMASA.

The Commission averred that part of the money was utilised by the respondent for personal gains.