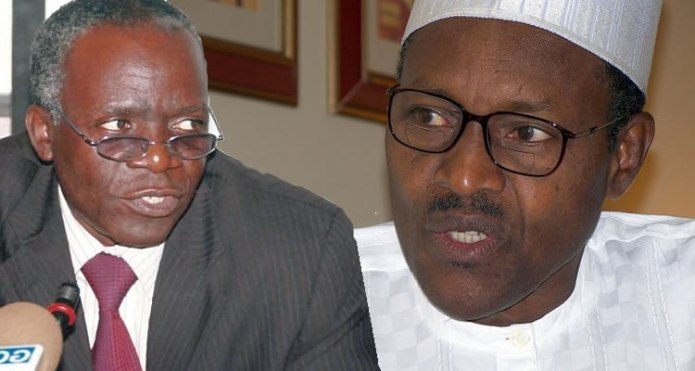 Tayo Soyemi, a member of staff of the Falana and Falana Chambers, quoted the lawyer as saying this while speaking at the on going “ECOWAS Consultative Meeting on Access to Justice and Respect for the Rule of Law” in Accra, Ghana.

He said the president should also comply with a court order compelling the federal government to release the details of stolen assets recovered so far.

“Buhari and ECOWAS leaders should comply with judgments and orders of municipal courts and regional tribunals in the interest of public accountability and political stability,” Falana said.

“Having now embraced the rule of law, President Buhari ought to direct the State Security Service to release Sheik Ibraheem El-Zakzaky and his wife from custody in line with the orders of Federal High Court of December 2, 2016. In the same vein, the orders of the Nigerian courts and the ECOWAS Court for the release of Col Sambo Dasuki (rtd) on bail pending trial should be complied with without any further delay.

“Other high-profile judgments that President Buhari must obey without further delay include at least four judgments obtained by Socio-Economic Rights and Accountability Project (SERAP). The first is the judgment by Justice Hadiza Rabiu Shagari ordering the government to tell Nigerians about the stolen asset it allegedly recovered, with details of the amounts recovered.

“The second judgment, by Justice Mohammed Idris, ordered the government to publish details on the spending of stolen funds recovered by successive governments since the return of democracy in 1999, while the third judgment, also by Justice Idris, ordered President Buhari to act on reports of investigations into allegations of padding and stealing of some N481 billion from the 2016 budget by some principal officers of the National Assembly, and to ensure prosecution of indicted lawmakers.

“The fourth judgement by the ECOWAS Court of Justice in Abuja also obtained by SERAP ordered the Nigerian authorities to provide free and quality education to all Nigerian children without discrimination.

“Nigeria has a duty to show leadership by example in the region since President Mhammadu Buhari is the current Chairman of the Authority of Heads of State and Governments of the ECOWAS. Such leadership has just been demonstrated by the Nigerian leader who has been reported to have distanced himself from the decision of the ruling party in Nigeria, the All Progressive Congress (APC) to expel its aggrieved members who sued the party in court over their grievances against the outcome of the recently concluded primaries of the party.

“President Buhari should equally show leadership in the region by ensuring that all judgments of the ECOWAS Court against Nigeria are fully and unconditionally obeyed. The hostile disposition of African states to courts is essentially the same.”