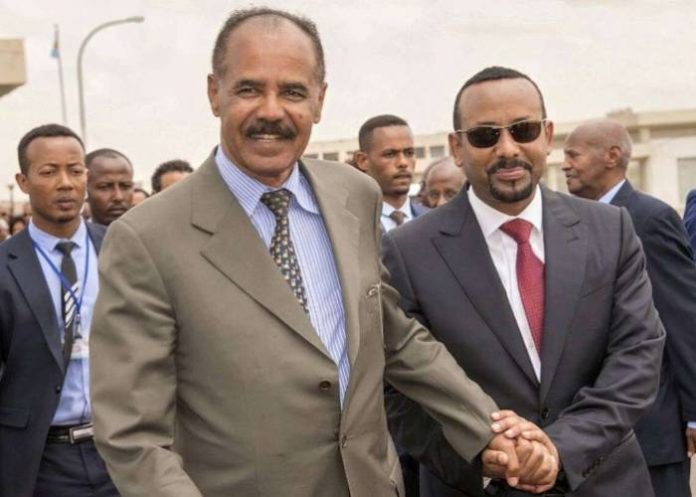 The presidents of Somalia and Eritrea met with Ethiopian Prime Minister Abiy Ahmed on Friday to cement regional economic ties as relations warm between the once-rival nations.

Somalia’s President Mohamed Abdullahi Mohamed and Eritrean President Isaias Afwerki arrived in the northern Ethiopian city of Gondar for the summit. They also visited a university.

The meeting is intended to “cement the outcome of the Horn of Africa economic integration agreement,” Ethiopia’s state-affiliated Fana Broadcasting Corporate reported.

The three leaders had in met in September to lay the groundwork for the agreement, the details of which remain vague.

“This is a testimony, this is a witness for everyone that the history of the Horn of Africa has changed,” the Somali president told officials during a speech in Gondar.

“Now we are moving for regional collaboration in economic development in order to be sure that we fight poverty in this region,” he added.

A former province of Ethiopia, Eritrea broke away in 1993 but was back at war with its southern neighbour five years later when a border dispute sparked fighting.

Shortly after his April inauguration, Abiy reversed that policy, leading the two neighbours to sign a peace deal last July.

Abiy and Isaias have since met repeatedly around the region, and the speed of the rapprochement has surprised even veteran Ethiopia politicians.

“There are things you think are impossible like normalisation with Eritrea,” Ethiopian President Sahle-Work Zewde told the South African Broadcasting Corporation on Thursday.

“For Ethiopia, this normalisation is helping a lot, not just for Ethiopia and Eritrea, but the region as a whole,” she said.

“Our vision is to have the same kind of relationship with all our neighbouring countries.”

The peace deal with Eritrea unlocked a flood of diplomacy in the Horn of Africa, with Somalia and Eritrea establishing diplomatic ties after decades of animosity, while rivals Djibouti and Eritrea have also moved to ease long standing tensions.