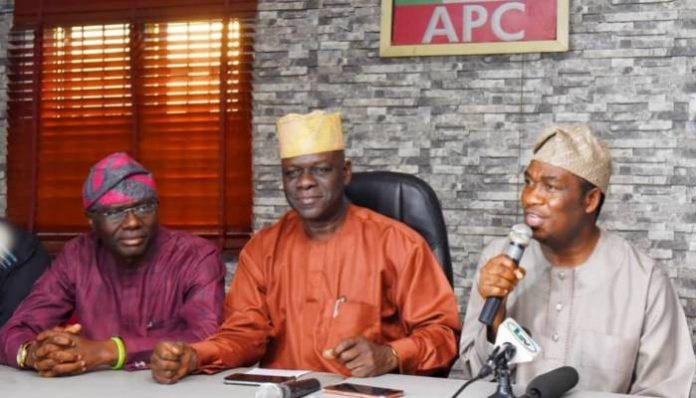 Ahead of 2019 general elections, the chairman of Lagos State All Progressives Congress (APC), Hon. Tunde Balogun, has urged Lagosians, to vote for the party’s governorship candidate, Mr. Babajide Sanwo-Olu and his running mate, Dr. Obafemi Hamzat.

Speaking at the weekend during the presentation of Hamzat as Sanwo-Olu’s running mate, Balogun said Sanwo-Olu and Hamzat is a fantastic team that will bring development to Lagos and build a Lagos that everybody will be proud of if voted for during the 2019 governorship elections.

It would be recalled that Hamzat was presented as the party’s deputy governorship candidate during a press conference at the party’s secretariat.

Balogun during the event declared that Hamzat was picked as Sanwo-Olu’s running mate base on the endorsement by the highest decision making body of APC and all the relevance stakeholders of APC in Lagos State.

Speaking at the event, Sanwo-Olu, who commended the choice of Hamzat as his running mate, expressed confidence that Lagos will be bet- ter and enrich with the caliber of Hamzat being his running mate if voted into office.

The campaign will start and we will show Lagosians that we are a team with APC that can take Lagos to the next level.”