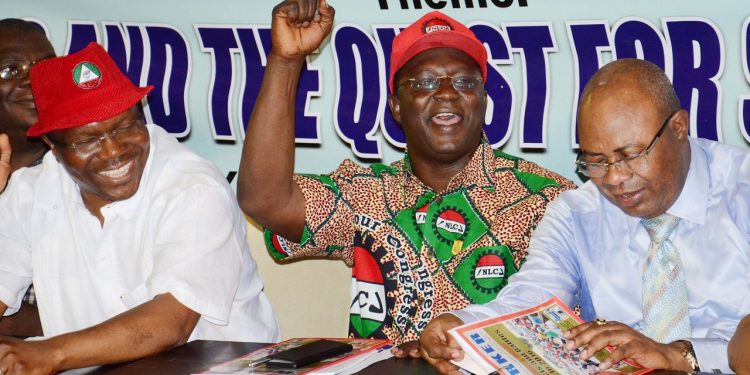 Organised Labour and the Organised Private Sector had maintained that N30,000 was the amount recommended as new minimum wage at the committee’s last meeting

After a long drawn and heated meeting of the tripartite committee on minimum wage, the Federal Government finally bowed to the Organised Labour as it acquiesced to their N30,000 demand.

The meeting, which began as early as 11 a.m. yesterday went into a two-hour recess at 8 p.m., reconvened at 10 p.m. and lasted into the early hours of today before an agreement was finally reached on the issue.

By the agreement, Organised Labour said the scheduled strike, which would have crippled the country from midnight was no longer necessary.

In an interview with Daily Sun on what transpired at the meeting, Deputy President of the Trade Union Congress (TUC), Sunday Salako, said all the members from the Organised Labour, Organised Private Sector, the Federal Government and state governments accepted and signed the N30,000 as the recommended amount in the report that will be sent to the Presidency.

“We ensured that the controversial Page 5 was signed by all the members of the committee. The N30,000 has been included there.

“We cannot sign the whole report because it is voluminous, but we have all signed the attestation page before we left because we don’t want a situation where somebody tomorrow will deny what transpired at the meeting. Should that happens, we can always refer to the report.”

“They were all there, they know the implication of what is going to happen if labour should go on strike as planned, hence they dare not joke with the meeting,” he said.Salako said the meeting was prolonged as a result of heated arguments between the representatives of governments and the Organised Labour.

“The states wanted to bring another snag when they insisted that they cannot pay the N30,000, but all the others including the Federal Government ensured that they did not drag us backward.”

He explained that the next step was to present the report to President Muhammadu Buhari after the chairman of the committee has secured appointment.

“All the members of the committee would be at the presentation as we were all there at the inauguration and we are expecting that it would be very soon because we want the National Assembly to pass it into law as soon as possible,” he said.

Securing the N30,000, according to multiple sources at the meeting, was a hard fought battle.

“Mid way into the parley, we thought the talks would be deadlocked as the committee could not readily reach a common ground as the government side dangled two figures,” said one of the sources.

This much was confirmed by chairman of the committee and former Head of Service of the Federation, Ama Pepple, who told newsmen after almost seven hours of the meeting that the committee will submit N24,000 proposed by the Federal Government and N30,000 insisted by labour unions.

She said the committee appealed to labour unions not to go on strike and they have agreed to consult their members.

Ngige said the two figures would be forwarded to President Buhari.Asked what becomes of NGF’s proposed N22,500, he said the governors will go with the Federal Government’s figure.

According to investigation, the decision to call a two-hour break, was mooted by members of the Organised Labour who demanded more commitment from the Federal Government on the actualisation of the new wage.

According to General Secretary of the Association of Senior Civil Servants of Nigeria (ASCSN), Alade Bashir Lawal: “We have over mobilised and our members would want more than N30,000 commitment for them to call off the strike. That is why we have to adjourn and reconvene by 10 p.m. to continue the discussion. We have crossed the hurdles of N30,000, but then there are still some hurdles to cross before we can say we want to call off the strike.”

Secretary to the Government of the Federation, Boss Mustapha was the first to leave the venue of the meeting at about 7 p.m. with the promise to come back. He was followed by the Governor or Kebbi State, Atiku Bagudu 20 minutes later, who also avoided talking to the press.

The labour union representatives came out after 8 p.m.

Recall that both Organised Labour and the Organised Private Sector had maintained that N30,000 was the amount recommended as new minimum wage at the committee’s last meeting, while Federal Government had insisted that no amount was agreed upon.

The Federal Government had subsequently said it would not be able to pay more than N24,000, while governors under the aegis of the Nigeria Governors Forum (NGF) offered N22,500.

In a related development, the Academic Staff Union of Universities (ASUU), University of Ibadan has formally notified the Vice Chancellor of the institution, Prof Idowu Olayinka, of the resumption of strike by academic staff in all public universities in Nigeria.

The union’s chairman, Dr. Deji Omole, in a letter, said lecturers would abstain from teaching, supervision, statutory and ad-hoc meetings during the industrial action.

The union explained that the strike stemmed from lack of progress between the union’s National Executive Council (NEC) and the Federal Government on the implementation of the 2009 ASUU/FG Agreements, Memorandum of Understandings (MOUs)/Memorandum of Action (MOA) and the truncation of the renegotiation of agreements.

However, the leadership of ASUU in UI held a meeting yesterday, while Omole said members of the union would be briefed at a congress that will hold today.

Before an agreement was announced, Senate President, Dr. Bukola Saraki, had appealed to the Federal Government, NLC and TUC to shelve the proposed strike in the country’s interest.

Saraki, in a statement by his Special Adviser on Media and Publicity, Mr Yusuph Olaniyonu, urged both parties to demonstrate sensitivity and concern for the plight of ordinary Nigerians.

He said the resolution was necessary to prevent Nigerians, who were already battling with the harsh economic conditions in the country from further hardship.

He commended labour for its patience on the matter, noting that the issues of the new minimum wage could have been resolved long before now.

“My appeal is for the two sides to immediately move fast, shift from their extreme positions and create a new middle ground in the negotiations for the new minimum wage.”

The shift in positions can be done even before the period of the commencement of the proposed strike action so that we do not further create tension within the economy.

“At this point, the interest of the people should be paramount in our minds. Any labour strike will cause inconvenience and discomfort to our people.

“While the government and labour are representing the interest of the people, it is important to also ensure we avoid any action that will not show sensitivity and sensibility to the plight of the people,” he said.

While Nigerians waited with bated breath for the outcome of the parley, yesterday, the National Industrial Court (NIC) had refused to grant a fresh order barring Labour from embarking on strike when legal fireworks over the lingering minimum wage crisis between the Federal government and organised labour resumed yesterday.

NIC also rejected another application for an order compelling the government to immediately commence the process of adopting N30,000 as the new national minimum wage.

Justice Sanusi Kado held that granting an injunctive order against the proposed strike would be unnecessary since his court had earlier made a similar one in a case brought to the court by the Federal Government last Friday.