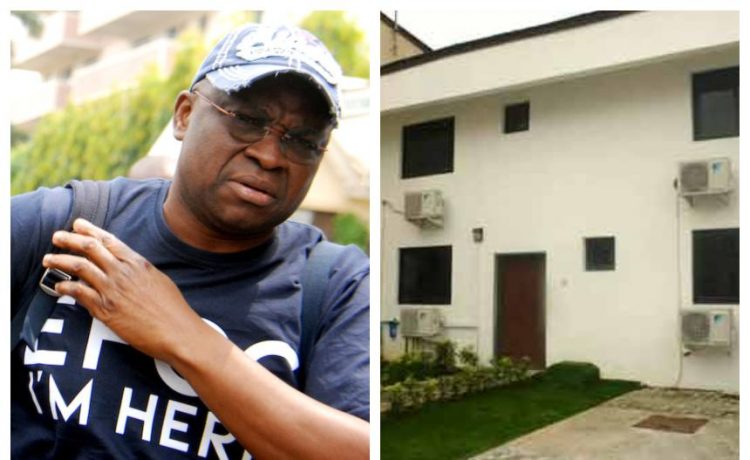 Two buildings in Ado Ekiti allegedly linked to the immediate past governor of Ekiti State, Mr. Ayodele Fayose, have been sealed off by the state government for lack of approved plan and permit.

The government, through the Ministry of Housing and Physical Planning and Urban Development, said the erection of the buildings contravened the laws guiding urban renewal regulations of the state government.

The sprawling twin duplexes, with elevated fence, covering over six plots, are located at the Government Reservation Area (GRA) in Ado Ekiti.

When journalists visited the site yesterday, the gate to the buildings was locked, while contractors working on there had deserted the place.

A paper, dated October 18, which was attached to the gate and signed by the Director of Urban and Regional Planning in the Ministry, said: “It was discovered during inspection by the inspectorate staff of our ministry that a residential building by you at GRA has no approved plan/permit for the site or bring same to our office to get certification for the erection.

“You are hereby ordered to suspend the use of the building premises until approved plan is submitted for clearance,” it stated.

The contractor handling the project began work about four months ago after the former buildings erected on the land were pulled down to give way for the new edifice.

Before Fayose exited office, rumour had been rife that he was the owner of the magnificent buildings.

In his response to the government’s action, Fayose accused Governor Kayode Fayemi of embarking on vindictive mission and acting out of desperation.

In a statement by his media aide, Idowu Adelusi, yesterday, Fayose said: “Fayemi was only acting out of desperation and
vengeance over the 2014 shameful electoral defeat.

“The property in question does not belong to Fayose. Fayemi’s government should produce evidence linking the former governor to
the property. Fayose has said he was ready for probe and that he will appear in person before any panel set up by Fayemi. So, why the desperation?

“Our advice is that Fayemi should place high premium on payment of the workers’ salary arrears, since N30bn is already in his custody
released by the federal government and not embarking on witch-hunting or disparaging his predecessor. The money should not be used to fund the election petition filed against him.

“He should hurry up to do all he could for the benefit of common Ekiti people, because time is not on his side,” Fayose said.