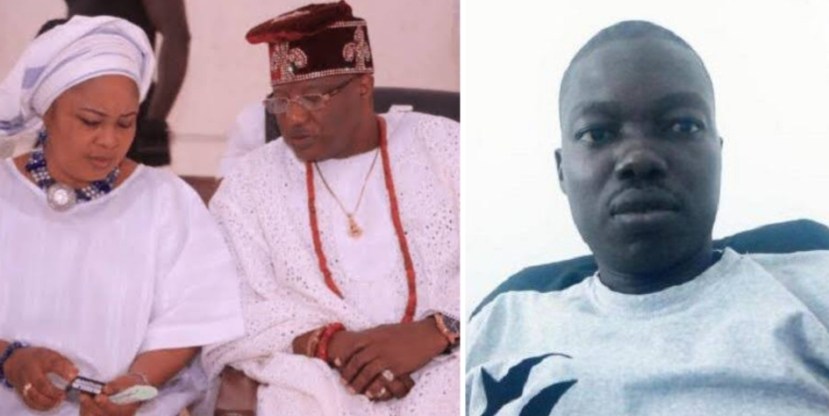 Prophetess (Mrs) Iyabo Oluwafunmilayo Adedoyin, Wife of The owner of Hilton Hotel and Resort, Ile Ife, in Osun State , Dr. Rahman Adegoke Adedoyin has continued to deny the allegation of ritual killing against her husband.

There have been widespread reactions to the recent death of Timothy Adegoke, an executive MBA student of Obafemi Awolowo University, Ife, Osun State, at the Hilton Hotels.

Dr. Rahman Adedoyin and other accused persons in the incident are currently under investigation and would soon be arraigned in an Osun court.

Mrs Adedoyin, spoke on the incident in an exclusive interview with The Nations Newspaper.

When asked on how she feels about the whole incident, she replied

“Like I said before, I feel very sad that such an incident was alleged to have occurred at one of my husband’s hotels. This is the first time something like this would happen since he ventured into the hospitality business about 21 years ago. To me, the whole thing looks like a bad dream. Some social media reports alleged that your husband must have killed him for money rituals…

My husband did not kill Timothy Adegoke or send anyone to kill him. I’m certain of this and I strongly believe that his innocence will be established in court in the course of his trial. I have been married to my husband for close to 40 years. He is a devout Muslim, and I can confidently tell you that in all the years we have been together, he has never been involved in anything fetish or ritual. His enemies capitalised on what happened at Hilton Hotels (Honours), Ife to use the bloggers who specialise in destroying people’s reputation to make money to smear his image. They took advantage of the sad incident at Hilton Honours.

All their evil plans and machinations will fail unless he was the one that killed the late Timothy Adegoke. Some of the dismissed employees of his establishments, some enemies within Ife community who have an axe to grind with him and are envious of his successes, took advantage of what happened to bastardise his name.”

Mr Adedoyin futher explained why her husband is still in Police custody despite her stand on his innocence.

The corpse was taken to Osun State University Teaching Hospital Complex in Osogbo for autopsy. Before the autopsy, the police called the government pathologist, asked the family of the late Timothy to bring their own pathologist and asked our family to bring ours too. The police did excellently well.

After the autopsy, one of the professors said that Timothy died of trauma; the other said that the cause of death could not be ascertained. The fact remains that he died and my husband’s hand is not in his death. But I am not happy that he died, because I am a mother.”