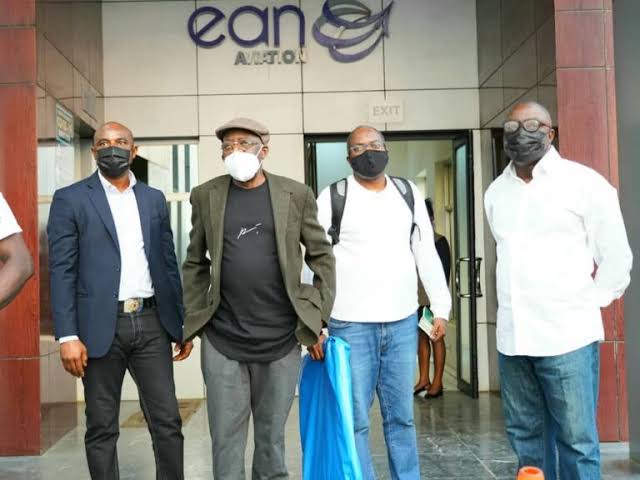 Several reactions have trailed the return of presidential hopeful, Asiwaju Bola Ahmed Tinibu, to the country after spending 10 days in London, United Kingdom.
Naija News reports that the National Leader of the All Progressives Congress (APC) returned to the country on Sunday afternoon ahead of the party’s national convention slated for February 26.

In a post released by his media aide, Tunde Rahman said the former Lagos governor arrived at the Murtala Muhammed International Airport in Lagos.

Rahman, while sharing a photo of his arrival on his social media page, said: “Asiwaju Tinubu on his return this evening from a trip abroad…”

Recall that Tinubu had in January declared his intention to contest in the 2023 presidential election after a visit to President Muhammadu Buhari.

Tinubu had after consulting widely travelled to the UK in what many reports claimed was for medical vacation.

His aides however debunked such reports, stressing that the former governor was in the UK for further consultation.

However, Nigerians have taken to Twitter to drop their views regarding the return of the former Lagoa governor to the country.

@NamebeKC wrote: “In other climes, presidential hopefuls go back to their ancestral home for consultations. But your Lion chose to go to the UK.”

@neneaboh wrote: “The UK is now the Capital of Nigeria where consultations pertaining to Nigeria is done?
Please give us lies that make sense.”

@DrAdamuGZang wrote: “We the supporters and card-carrying members of the APC heartily welcome our leader and presidential hopeful back home.”

@steveose wrote: “What kind of consultation? Is this how this country will progress? is Nigeria capital in the UK? Please stop supporting the mortgaging of Nigeria’s future. Same way Buhari went to consult in UK in 2015 and here we are.”

@LordJayvo wrote: “Liking this new Tinubu who so ever is advising him to look smart n younger by dressing like this just to fool the youth n the citizen that he is still healthy n firm deserves chocolate. But as for me ooo, na who I go vote for I don know if u like dress like 2pas e no go shake me.”

@akhator15 wrote: “Consultations indeed. Who did he meet with? The doctors and the nurses. Did you meet with Nigerians in UK? Stop telling lies as you will be caught one day.”

@nickleke wrote: “A sartorial consultation was taken too seemingly. Pet peeve for me…the people who’re on his campaign haven’t seen fit to adjust his clothing to fitting smart wear. This isn’t Lagos PDP vs APC. Make an effort to introduce some virility into the man’s outlook. It sells.”