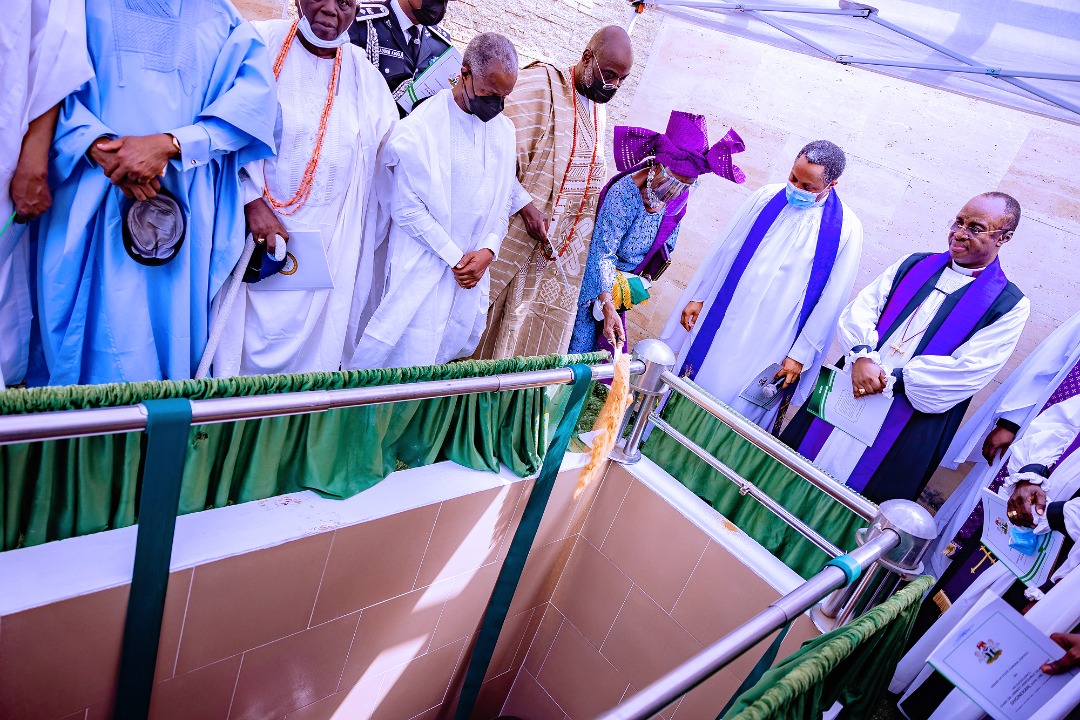 Vice President Yemi Osinbajo yesterday described the former Head of Interim Government (ING) the late Ernest Shonekan as a man of destiny who was chosen for his time.

Speaking at the State funeral service, organised in honour of the departed national leader, held at the Cathedral Church of Christ, Marina, Lagos, Osinbajo said Shonekan proved by his life “that destiny for one or for a nation is the manifest result of small choices made every day by ordinary people doing the best they can and persevering in goodness.”

The Vice President said Shonekan lived an extraordinary and selfless life while on earth and left a lesson behind for all Nigerians to follow.

“That Chief Shonekan lived an extraordinary life is self-evident. His accomplishments as a businessman, political figure, and bridge builder are already the stuff of legend and will be talked about for generations. But perhaps what deserves greater attention is the way he carried himself through life and the high values he exemplified, that genuine respect he had for people of all classes, religion, tribe or gender.

“His unflinching belief in the inherent goodness of everyone; his love and generosity not just to his family, but to all, the knowledge and experience driven leadership and counsel he provided, always with unfailing humility and courteousness, were all the unique virtues that underpinned his extraordinary achievements.

“Ernest Shonekan leaves a life lesson for the nation he leaves behind. What might that be? We would be right to think of Ernest Shonekan as a man of destiny, a man chosen for his time.”

Osinbajo said what deserved great attention was the way Shonekan carried himself through life and the high values he exemplified during his time on earth.
He said that Shonekan had a genuine respect for all and would not be forgotten in the sands of time and history.

“His love and generosity, not just to his family but to all, was felt by all. His counsels are always with unfailing humility and courteousness. These are unique virtues that underpinned his selflessness.

“Chief Shonekan lived his life always conscious of, and motivated by a burden of duty, as a citizen of considerable privilege, to give back, either in his many philanthropic and civic pursuits or in public service.

“Today, we stand in the light of this great man. The inevitable transition of the people that we love gives us a sombre opportunity to look into the life that they led, and in that light, checkmate our own lives,” Osinbajo said.

Speaking on his tenure as Head of ING, Osinbajo said: “Shonekan had a position in Nigeria that few had before him or have now. But none could have written the script of the dramatic series of occurrences that thrust upon him the role of the Head of State and Commander-In-Chief of the Armed Forces of Nigeria, in one of the most turbulent chapters of our nation’s history and it became his lot to steer the ship of state in those extremely stormy waters.

“He was in his own words compelled by a sense of duty and responsibility to accept the role and to give his best in shepherding his country through an experience unknown and unprecedented in our history.

“He once said in an interview shortly after he was named Chairman of the Transitional Council and Head of Government, “If your country needs you, leave everything that you are doing to go and help.”
Speaking of Shonekan’s last days, the VP said: “In the last chapter of his life, Chief Shonekan assumed the mantle of an elder statesman. He was supportive of all governments and gave his advice far above the trenches of partisanship. He was consistently calm and dignified. He was a steady voice of national counsel to all who sought him out.”

At the Ebony Vaults and Garden, Ikoyi, Lagos State, where Shonekan was interred, the Nigerian Army, 81 Division, honoured him with a 21-artillery-gun salute.
Shonekan died on January 11, aged 85. He served as Head of the ING from August 26, 1993 to November 17, 1993.

Earlier on Thursday night, President Muhammadu Buhari and other dignitaries paid tributes to Shonekan during A Night of Tributes in Lagos.

Boss Mustapha represented the President at the event.
Buhari said: “Chief Shonekan was a man I respect so much because of his passion for the development of Nigeria. He was a patriot and a father of the nation. I knew that at the time he was beckoned to lead the country, no faint-hearted man would do that. No man will offer himself as a sacrificial lamb in the manner of Chief Shonekan.

“As a member of the Council of State, Chief Shonekan attended all meetings until his demise because of his passion to see Nigeria grow. In the last four years, there was hardly any state event that he was invited to that he ever missed.

“He was a successful lawyer and businessman who rose through the ranks of UAC before he became the Head of Interim Government.”

He said, “He was a respected industrialist, a first class boardroom guru. He was in his early 40s when he rose to become the Chairman of UAC. By this single deed, he became a role model to many Nigerians. He laid the foundation of many things we enjoy today.

“After reaching the zenith of his private sector life, faith made him the Head of the ING. It was a turbulent time in the life of our country. He led the country with all sense of courage and sacrifice.

“Nigeria has indeed lost a true leader; he was a kind human being and his wealth of experience will be sorely missed. We will continue to cherish his memory.”

Also, the Ogun State Governor, Mr. Dapo Abiodun, said Shonekan lived a life of humility.
“Baba’s life and time are inspiring narratives of events and achievements. His transition has left a void and it is the end of an era. He was a colossus whose feat will be difficult to replicate.

“Beyond business, our nation remains grateful to him for his role during the trying periods. He was a loving husband, an embodiment of humility. His selfless service will be sorely missed,” Abiodun said.

His brother, Chief Tunji Shonekan, described the deceased as a peacemaker, a family man and a core Egba man.