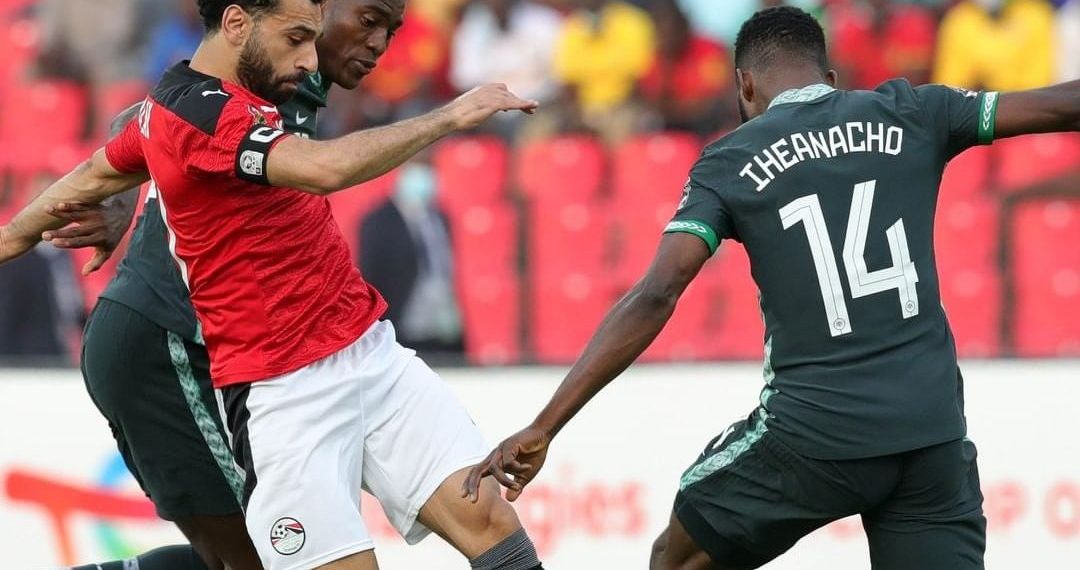 The match between former champions Egypt and Nigeria was settled by an excellent strike from Kelechi Iheanacho 30 minutes into the first half. Egypt’s Pharaohs were a disappointment and star man Mohamed Salah had only one sniff at goal, which was well saved by Maduka Okoye.

This was the first Egyptian loss in the first round since 2004 and they kicked off the game with a long thump upfield. But the Eagles who started with an experienced backline stabilised and put pressure on the Egyptian defenders, not allowing them time on the ball.

It was the Egyptians that had the first shot by Mostafa Mohamed but Okoye handled it confidently. Simon then took on Akram Tawfik, who was left stricken and needed treatment on the pitch.

Nigeria won the first corner in the 11th minute as Egypt made a forced change with left-back Tawfik not recovering from the injury he copped in a clash with Simon. In the 12th minute, Kelechi Iheanacho almost jinked his way past three defenders into the Egyptian box. Also, a mistake almost led to a scoring chance for Mohamed Trezeguet

There were three stoppages because of inadequate ball pressure as the game was fragmented.

The first good interchange of passes by the Eagles in the final third opened up a shooting chance for Simon in the 26th minute, but he shot into the side netting.

That was a sign the Eagles were stepping up their game and when the goal came, it came from the left wing where Simon continuously terrorised the Egyptian defence to no end.

In the 30th minute, Simon delivered a cross that was diverted to Joe Aribo, who had the presence of mind to cushion his header towards Kelechi Iheanacho, who controlled on his thigh and swivelled with a shot that grazed the left post, leaving Mohamed El Shenawi stranded. The Eagles were worth their goal having controlled the game, especially in midfield.

The second half started with the Eagles looking for a second goal and from the first corner kick, Kenneth Omeruo headed wide.

Three minutes into the second half, Awoniyi thought he had his first Nigerian goal but video replays showed the ball did not cross the line. Egypt were put under constant pressure with the eagles camped in the half of the Pharaohs.

Aina burst up the pitch in the 56th minute and the ball fell to Iheanacho but with the goalkeeper out of position, his first touch allowed Hegazi to make a successful tackle. That should have been 2-0 to Nigeria.

Also, Aina had a shot from outside the box when he had options to exchange passes with Iheanacho on the edge of the Egyptian box.

The Pharaohs broke through in the 64th minute through second-half substitute Zizo but Ekong made a timely clearance. Iheanacho got a chance to shoot from a quick pass from Ndidi but he sent his powerful shot wide.

Aina, now very prominent in many attacks, won another corner in the 68th minute as the Egyptians began to show more control and intent. Salah went through on goal in the 70th minute but he was crowded out by three Nigerian defenders before Okoye made the save.

Omeruo was injured from a Nigeria corner and needed treatment on his right leg. The defender came back on. Chidera Ejuke had a shot on the Egyptian goal but it was straight down the goalkeeper’s throat. Omeruo went down again and had to be taken out on a stretcher. Semi Ajayi was sent on with Kelechi Nwakali also coming on for Iheanacho.

A clash between Simon and Zizo was checked by VAR but the game continued with a free-kick to Nigeria. Ejuke had a chance to shoot in the box but he took too long and his effort was blocked. Ndidi needed treatment for cramps as the game got stretched.

Aina conceded a corner when Okoye could have claimed but the corner was wasted. Egypt won another corner in the 89th minute but it was well defended. Alex Iwobi came on for Simon in the 90th minute as four minutes were added on.

Iwobi had to concede a corner two minutes into added time. A quick counter almost led to Nigeria’s second goal but El Shenawi made a good save. Bakary Papa Gassama from The Gambia blew for the end of the match and the Nigerian team celebrated right in front of their fans.