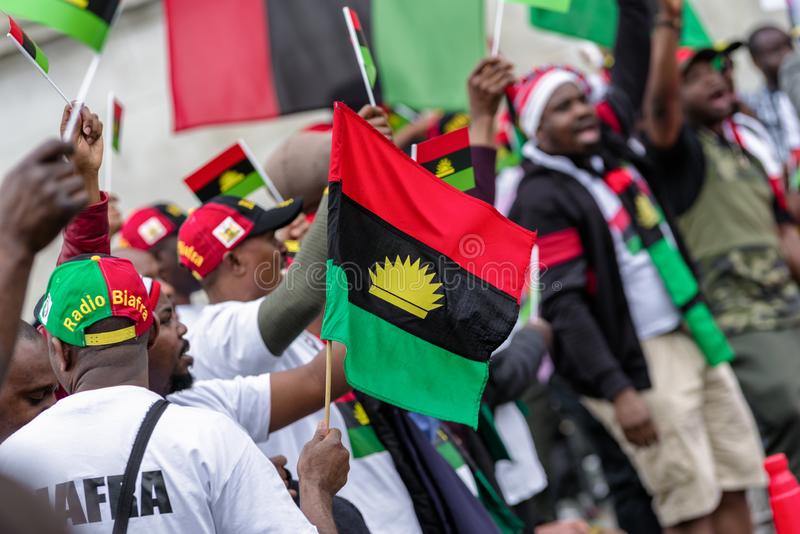 IPOB also said that the people of Orlu zone in Imo State celebrated Christmas and New Year peacefully because the abductors of Rochas Okorocha’s son in-law, Uche Nwosu, were exposed.

Popular secessionist group, the Indigenous People of Biafra has alleged thay a South-East governor was recruiting Fulani into the Ebubeagu security outfit to rape Igbo women.

IPOB also said that the people of Orlu zone in Imo State celebrated Christmas and New Year peacefully because the abductors of Rochas Okorocha’s son in-law, Uche Nwosu, were exposed.

According to the group, if abductors of Nwosu were not exposed on time, the perpetrators would have taken his life and lied that its militia arm, Eastern Security Network, was responsible.

In a statement by its spokesperson, Emma Powerful, IPOB said, “We wish to warn security agencies in South-East and Igbo land in general that we will not accept violation of Biafra women by any criminal under the guise of any security agency.

“Following the frustration and lack of professionalism by Nigerian security agencies, they have as usual resorted to lies and propaganda to deceive the gullible minds.

“The Nigerian Army and police have been parading and killing innocent citizens in Imo State, and they started with falsehood to demonise their innocent victims. They can only deceive those who don’t know what is happening in Imo State, since Hope Uzodinma led Imo State government and his All Progressives Congress turned Imo State into an abattoir for innocent Biafrans.

“Nigeria security agents and Ebubeagu security members recruited by the APC governors in South-East have been killing innocent citizens in Imo State, and they keep telling their usual lies again that they repelled Eastern Security Network operatives who allegedly besieged the palace of Eze Emmanuel Okeke of Amaifeke in Orlu, Imo State.

“We will not be surprise if these criminals behind the bloodletting in our land starts going after religious leaders and blame their abominable act on IPOB and ESN, that is when they will know that Chukwuokike Abiama are behind us and will not waste time in exposing them.

“For the umpteenth time, IPOB and ESN have no hands in the spate of killings and abductions in any part of Biafra land. Such barbarity is not part of our mandate. The security agencies and their criminal politicians and their recruits are behind it in their desperation to demonise IPOB and ESN.

“The recent statement by Senator Rochas Okorocha, which to us is an exposition of the evil APC government in Imo State for some years now, has vindicated us. Some wicked people in power in collaboration with the security agencies are the masterminds of the insecurity in our land.

“We wonder how a sitting governor in South East would recruit Fulani terrorists and Alamajiris as Ebubeagu security outfit to join soldiers and police officers who are terrorists to further unleash mayhem on our people.

“We are aware that the man installed in Imo State as governor has not finished what he came to do for his slavemasters. Imo youth must come together and organise themselves to chase that government and his agents of death out of Imo State.”