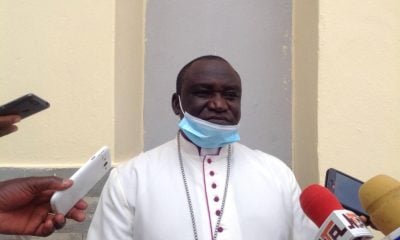 Bishop Timothy Yahaya of the Anglican Communion, Kaduna Diocese, has said President Muhammadu Buhari failed woefully in his campaign promises he made over six years ago.

In his New Year message to Nigerians, Bishop Yahaya, who took a critical look at the fight against corruption, insecurity and economy where Buhari promised to bring sanity, lamented that those areas are worse now than when the President met them.

He alleged that the nation’s leaders are not accountable to the citizens, saying that none would escape to give an account of stewardship before God on the judgement day.

He urged Nigerians not to lose hope, according to him, there would be recovery and transformation this new year as God will show the people mercy in the country.

Bishop Yahaya opined, “To score the current government, you have to look back at what they campaigned to come and do in office. Number one, is to stamp out corruption, but so far everybody on the street knows factually that there is corruption everywhere. They have not succeeded in fighting corruption. The fight against corruption should not be only when the people have looted the country. What are we doing to nip corruption right from the desk it is found, right from where the contract will be awarded. So for me the fight against corruption has not even gone average.”

He stated that the next campaign promise was security, stressing that when this government came to power Nigerians knew that the only part of the country that was seriously challenged security wise was the North East.

He said that today Katsina people cannot say they are experiencing security when the governor said the people should buy guns and defend themselves, adding that same thing with Sokoto where some travelers were burnt alive.

He stated that the worrying thing about insecurity is that when Nigerians are killed it becomes a number but doesn’t look like human beings and called on the power-that-be should visit every scene that killings happened in this country to show how affectionate they are to the people.