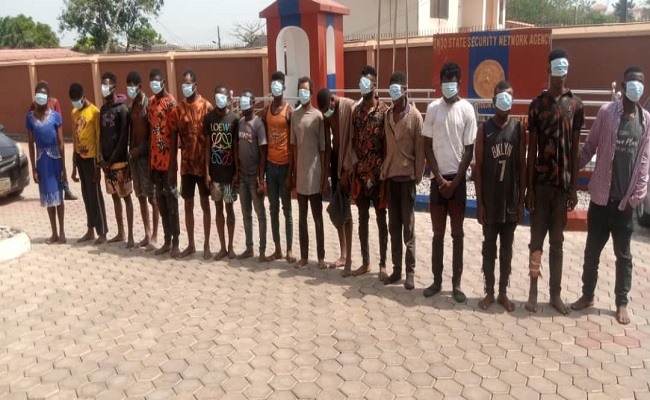 Four women and a five-month-old baby who were abducted by kidnappers who invaded a church in Akure, Ondo State capital have been rescued by operatives of the Ondo State Security Network Agency, known as Amotekun Corps.

It was gathered the kidnappers stormed the church located at Alagbaka area of the state capital around 1 am during a night vigil and abducted the five-month-old baby, her mother, the 78-year-old prophetess of the church, and two other women.

The kidnappers took all their victims to a private house located at Edo lodge axis of the town before taking them to a bush along Akure-Ikere road where they molested some of the victims.

It took the intervention of the men of the Amotekun men who swung to action and traced the kidnappers to their den while one of the suspects was arrested.

Speaking on the arrest of the Amotekun Commander in the State, Chief Adetunji Adeleye, explained that one of the kidnappers who dressed and disguised as a woman was arrested in the bush where the victims were rescued.

The Amotekun boss said the arrested kidnapper identified as Abiodun Igbekele, confessed to the crime while investigation had commenced towards apprehending the other fleeing gang members.

Adeleye said: “Late in the night on Wednesday at about 11:15 pm, we received a distress call that kidnappers stormed the church premises and apprehended some of the worshippers.

“Within minutes, our men swung into action and we were able to comb the bush around and cordoned off all the streets around the place and we were able to apprehend this lady who incidentally is a man. He used the victims’ clothes as breasts. He is a man in a lady’s uniform.

“They molested the women and took them to a nearby bush where they were arrested. We were able to secure the release of the kidnapped victims within one hour of serious search in the surrounding bushes around.

“One of the arrested kidnappers confessed that he is part of the gang that specialises in kidnapping.”

He also disclosed that about 75 suspected kidnappers and armed robbers had been nabbed within the last few weeks across the state, while the state security outfit had uncovered a plan by bandits to attack banks in some parts of the state.

He said: “Within the first few weeks of phase seven of ‘Operation Clean Up’ we arrested over 75 hardened criminals. Some of them had confessed to the kidnapping. There is also a syndicate that specialises in dismantling okada within 30 minutes after stealing it. They sell them as scraps.

“You will have observed that all major junctions are being manned by officers and men of the Ondo State Security Network Agency, NSCDC, Nigeria Police at strategic locations within the state.

“This is because we received intel that bandits and armed robbers are preparing to strike financial institutions within the state. And we remain resolute that such plans will be frustrated and will not work.

“Apart from the fact, the law establishing the corps empowers us to ensure the safety of lives and property on major roads, forests and everywhere within the state. Our primary role remains that of complementary function to the existing security architecture of the state.”

He stated that about 350 unregistered vehicles and tainted glass were impounded and what he described as “not too good elements” were found in many of the vehicles.

The Ondo Amotekun boss stated that what was discovered in those vehicles confirmed the use of tainted and unregistered vehicles for criminal activities.

He disclosed that combined security operatives have increased surveillance across the state because of credible intelligence that bandits planned to attack some financial institutions in the state.

The Amotekun boss said “a couple of weeks ago, we warned residents to be wary of taxis that are not painted, the use of okada in the night. We were able to arrest the ring leaders of a syndicate that specialises in stealing exotic phones.

“They operate with okada. Once they snatch the phone, they won’t run, they will just throw it to someone to will grab it and mount a bike, and he immediately takes off.

“When we heard complaints in a particular area around Agagu road and Oke-Ogba. We brought our bikes and pretended as commuters. They actually attacked one of our men, not knowing that we have laid siege so, we were able to arrest them right on the spot.

“We also have some of them who specialises in kidnapping victims that entered their unmarked taxis. What they do is that they are private cars but they put taxi insignia on the vehicle and remove it in the night not knowing that two of the passengers in the vehicle are already members of the syndicate. On some occasions, they hypnotise and on some others, they terrorise with weapons.”