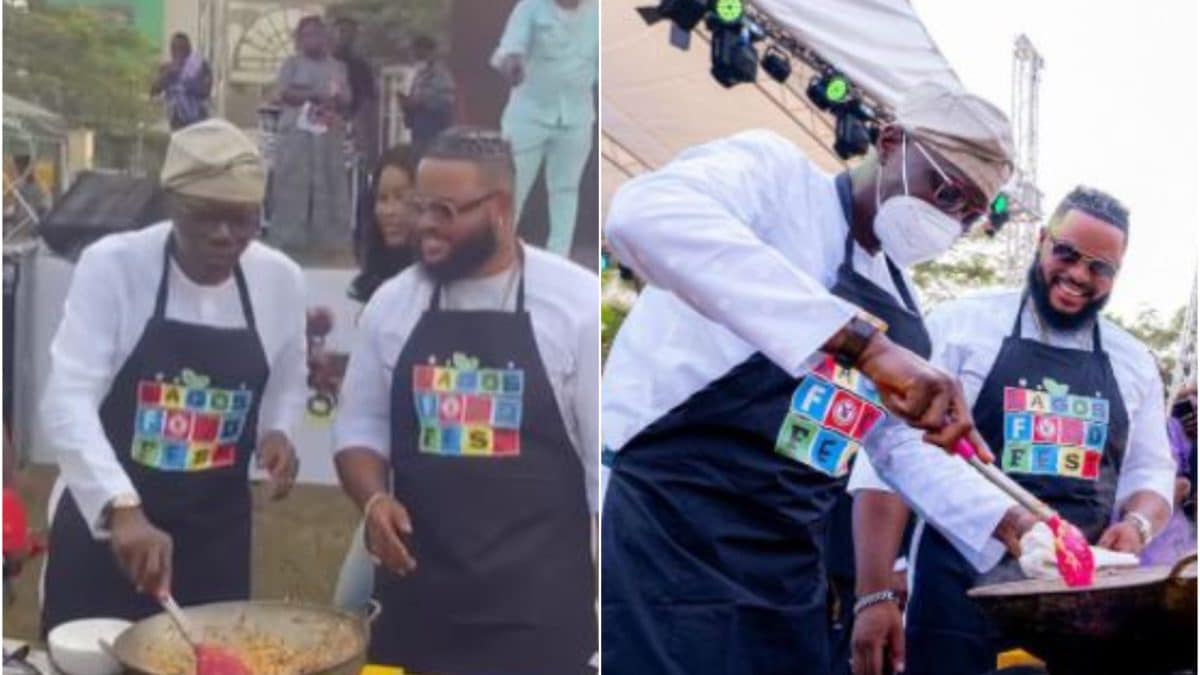 The Governor who was dreesed in a black apron set up the symbolic outdoor kitchen and prepared stir fried rice, the official meal of the occasion, in the full glare of the public.

The audience roared in excitement, as the Governor and White Money served the hot meal to sensory panelists who confirmed the quality of the cuisine.

This marked the beginning of the event organised by the Ministry of Agriculture at the Justice Muri Okunola Park in Victoria Island. The initiative, formerly known as Seafood Festival, is a yearly event hosted by the State Government to exhibit local delicacies and agricultural commodities produced in Lagos for international market.

After declaring the event open, Sanwo-Olu moved round to have one-on-one engagements with tradesmen who brought their products for exhibition.

There were more than 300 different foods, drinks, aqua products and agricultural commodities exhibited at the event. There was also a variety of games for children on the field.

The Governor encouraged the sellers to take advantage of the Lagos State Employment Trust Fund (LSETF) to grow their businesses, noting that part of the event’s objectives was to boost the entrepreneurial spirit of the residents.

Sanwo-Olu said the administration remained committed to promoting growth of Micro Small and Medium Enterprises (MSMEs), adding that his Government continually carried out reforms to ensure ease of doing business in Lagos.

“Today, after declaring the Lagos state Food Festival open, I assisted the guest chef, White Money, (winner of 2021 Big Brother Naija) to cook a Lagos delicacy, which was later served to sensory panelists who confirmed the quality of the cuisine.

The Food Festival which was put together by the Ministry of Agriculture for vendors to exhibit local delicacies and agricultural commodities produced in Lagos for the international market, had hundreds of foods and drinks on display.

I encouraged the sellers to take advantage of the Lagos State Employment Trust Fund (LSETF) to grow their businesses, noting that part of the event’s objectives was to boost the entrepreneurial spirit of the residents.

Our administration is very committed to promoting the growth of Micro, Small and Medium Enterprises (MSMEs) and we will continually carry out reforms to ensure the ease of doing business in Lagos.” Meanwhile Nigerians have taken to their different social media accounts to react.

“This food where two persons dey cook, hope they no go make mistake. I like Gov. Sanwo-Olu, he is very humble. He always like to identify with the youths everywhere. No too much bigmanism in him.

“Well done Odogu Whitemoney for being who you are. Enjoy!”

“Applying Other strategies to win you guys heart.”

“All this na just to sakamanje us. Mr governor, who ordered the shootings at lekki toll gate. Please we need an answer.”

“This is great talent WM! I believe na like this u go take win Grammy next year by God’s grace!

“And I hope they served all lagosians food to eat. Food fest na distraction baba.”

“Guys, go and learn how to cook o, no excuse for you. Na being a good cook bring White money this far. Now he’s a Mr chef alongside the Lagos state governor.

“Who say God is not wonderful.”

“Well as much I’m hurt by Lekki killings I will say that Sanwo-Olu is indirectly asking for forgiveness. I love the public attitude of the governor. And however maybe his strategy will help him win back the souls of the living most especially Lagos state/southern Nigeria youths.”