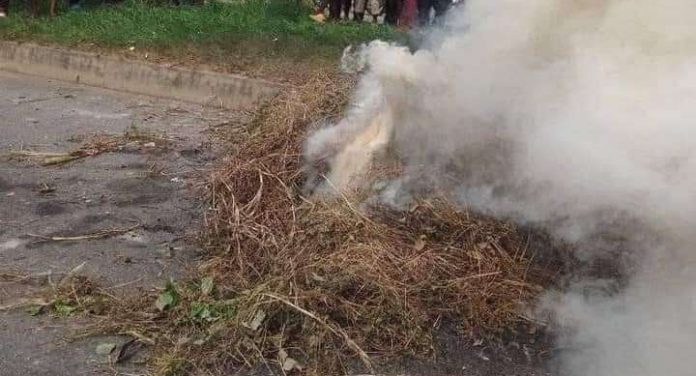 Two Young men between the ages of eighteen and twenty-eight have been hacked and roasted to death by an angry mob at Ikot Oku Ikono Junction early today for allegedly snatching N300,000 from a point-of-sale (POS) operator at gunpoint.

The incident happened about 9:00am at Ikot Ikono Junction after the flyover en-route Abak where two young men came on a motorcycle, pointed guns at the POS operator (name withheld by us), carted away the money.

The drama began when the POS operator raised an alarm and shouted for help.

It was gathered that luck ran out of the criminals as they ran attempted to kick start the brand new motorbike they used, the bike refused to start, there the angry mob ran after the criminals, overpowered them, retrieved the stolen money and handed the money over to the girl, beat up the two men to stupor, tied them on their motorcycle and burnt them to ashes.

The incident attracted a large crowd of sympathizers thereby causing traffic jams within the area.

All effort to speak with the POS operator proved abortive, as her phone was permanently switched off at press time.

But Nyenime Effiong, a tricycle operator, who witnessed the incident, told newsmen that the suspects ran out of luck when the alarm raised by the PoS attendant attracted angry youths, who seized them and immediately set them alight before the arrival of Police operatives.

“They thought their operation would be swift, but it turned to be end-of-the-road for them. They arrived on a motorcycle and the one on the passenger seat alighted and suddenly accosted the PoS operator with a gun and demanded cash.

“She immediately screamed at the sight of the gun, but in a swift reaction, some commercial minibus and tricycle drivers with other angry youths trooped to the scene, chased the thieves to where they were overpowered.

“Before the motorcycle rider, who was still steaming the bike while waiting for his fellow accomplice to get the cash from the attendant could escape, he was apprehended before he could speed away”.