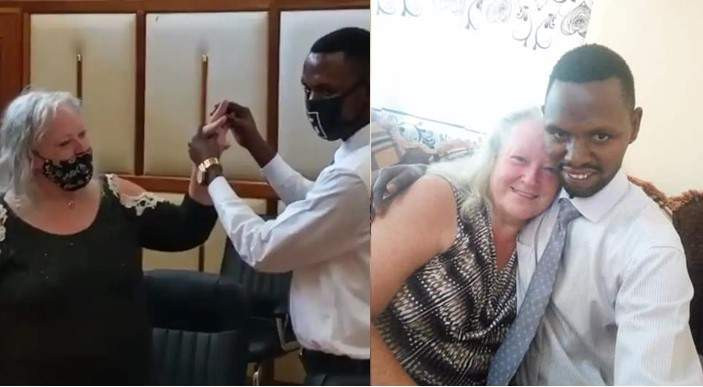 Musyoki said they met on Facebook in 2017 and was he supposed to travel to the US to meet her in 2018, but was denied a visa.

A 35-year-old man from Kenya man who married a white woman twice his age, has revealed that he paid her bride price.

Bernard Musyoki who married 70-year-old Deborah insisted that his love is genuine in an interview with a local publication, and also disclosed that he paid paid Ksh100 as her bride price.

Musyoki said they met on Facebook in 2017 and was he supposed to travel to the US to meet her in 2018, but was denied a visa.

He said; I sent her a friend request, after a week, I asked her to marry me and she accepted. We even exchanged vows inbox.”

They kept communicating, and on December 29, 2020, the woman decided to travel to Kenya to meet her prince charming.

Musyoki revealed that Deborah’s parents passed on years ago and he had to negotiate for dowry payment with her and her children.

He said; “They said they wanted only Ksh100 and told me to take it to church as an offering and she said that’s my dowry.”

Musyoki further revealed that Deborah’s children are also older than him but they relate well. He said when their mother told them she had found love again, they accepted him and supported their relationship.