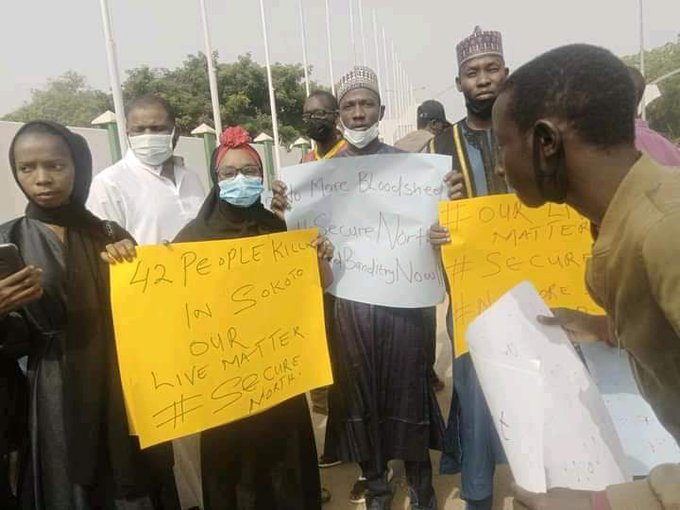 A group of Northern Youths under the umbrella of Concerned Northern Nigerian Groups (CNNG), on Friday, protested against the incessant threats of insecurity resulting in the loss of lives and properties in the region.

The protesters demanded an immediate end to the killings and destruction of properties going on in the region.

They also condemned the gruesome killing of over 40 innocent bus passengers at Gidan Bawa village in Sokoto State by terrorists.

One of the leaders of the group, Zainab Ahmed, while briefing newsmen noted that the northern part of Nigeria was bleeding owing to the incessant killings of innocent souls that go about looking for their means of livelihood in the region.

“We are here to call on the Nigerian government that the North is bleeding and enough is enough. We are tired of burying our women, children, and men. Our crops are being razed by bandits,” the spokesperson explained.

She added that they are here to tell the government to secure their lives, saying that they bury hundreds of people on a daily basis yet there is no action, not even ‘sorry’ from their leaders.

According to her, they are protesting because they are angry, as children of Baba Buhari, they feel that he has neglected them.

She called on their followers to vote for Buhari in 2019 for the next level and this next level is killing them, stressing that they are dying as it is not what they voted for.