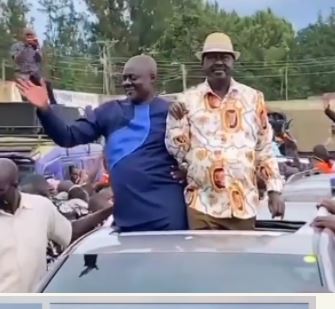 A video of a visibly sick African politician seeking reelection in an open roof vehicle has stirred reaction on social media.

The yet-to-be identified politician who looks sick and tired could be seen on the streets campaigning for reelection with supporters trailing his convoy.

The politician seems unrelenting and willed to rule over his people despite struggling with his health.

The video has been greeted with reactions as many condemns the politician for seeking reelection despite his debilitating health.

Reacting to the video, one social media user wrote; ”Greediness in its highest form. Someone that has stroke is still campaigning for re-election. Na by force to serve our country.I’m sure he’s looking for government money to fund his treatment.”

Another wrote; ‘No one with an iota of common sense ought to support or hail this madness, but it’s obvious he has many supporters. Africans deserve the type of leaders they are getting.’

Nas wrote; ‘African leaders can leave power willingly except they die there, just like Buhari’

NNtv wrote; ‘This man looks more like a dead man. Africa is always on the highest level stupid happenings.’