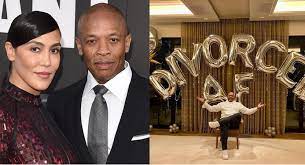 American music producer Dr. Dre is celebrating his divorce after ending his marriage of 21 years.
On Thursday, December 9, a friend of Dre, Breyon Prescott posted a picture of the artist posing in front of balloons which were used to spell the word divorce.

Dr Dre’s ex-wife Nicole Young is still fighting for half of his $1billion estate.

Nicole had demanded for divorce in December 2020. The legal battle is still ongoing but the judge has stated that the former couple can be considered legally single from April 2021.