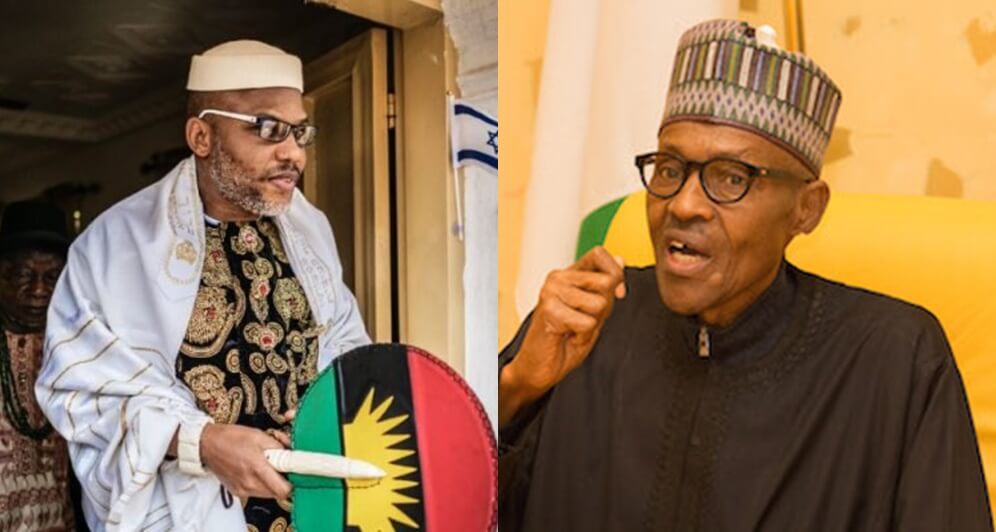 Mixed reactions have trailed the declaration by President Muhammadu Buhari to consider the appeal by some Southeast leaders to release Nnamdi Kanu, leader of the indigenous People of Biafra, IPOB.

The Southeast leaders under the aegis of Highly Respected Igbo Greats, led by First Republic parliamentarian and Minister of Aviation, Chief Mbazulike Amaechi, called for the release Kanu during a meeting with Buhari at the State House, Abuja.

Amaechi pleaded with the president that, rather than opting for military actions, political solutions should be considered in Kanu’s case.

Responding, Buhari who promised to consider their appeal, however, noted that an unconditional release of Kanu runs contrary to the doctrine of separation of powers between the Executive and the Judiciary.

The president also stressed his on his policy of non-interference with the Judiciary.

However, a constitutional lawyer, Maduabuchi Idam, countered the president’s stance that he would be interfering with the judiciary, if he orders Kanu’s release.

Idam explained that contrary to the president’s remark, the Nigerian constitution permits Buhari to direct the Attorney General of the Federation, Abubakar Malami to withdraw the case against Kanu.

Speaking , the Abuja-based lawyer said, on the interest of the public, the president can direct Malami to withdraw all cases against anyone, including the IPOB leader.

According to Idam: “Kindly note that if an offence is alleged to have been committed, it is the state that prosecutes the alleged offender. In this context, the state is the Presidency and that is why it is the office of the Attorney General of the Federation that prosecutes Mr. Nnamdi Kanu and those of his members on behalf of the Federal Government.

“Meanwhile, by virtue of Section 174 (1),(c) of the Constitution of the Federal Republic of Nigeria 1999 as Amended, the AGF has the constitutional power to amongst others, enter a “nulle prosecui” ( power to discontinue a case) in favour of any person being prosecuted for any offence on behalf of the Federal Government. Similarly, the power is also available to the AG of the State with respect to State offences. See Section 211 of the Constitution.

“In the light of the above, the President of Nigeria, in the interest of the public, can direct the AGF to withdraw any case that is instituted against any one on behalf of the Federal Government.

“By the operation of the said provision of the constitution, the AGF has the vires to personally or through an officer in his office, walk into the court where Mr. Kanu is undergoing prosecution and apply to withdraw the charges against him and his members, and the court has no power under the constitution or any law, to refuse the Application or demand the AGF to give an explanation for that.

“If the President feels that a matter should be withdrawn from the court for public interest, all he needs to do is to direct the AGF to do the needful.

“I must say that I commend the courage of Mr. President for the first time, at least for saying that he will consider the request to release the IPOB Leader, Mr. Nnamdi Kanu and his members.”

Idam’s remark was, however, countered by a Northern socio-political activist, Yaro Abdullahi, who warned on the dangers of releasing Kanu.

Abdullahi warned that Kanu’s release may serve as a spring board for other people to commit serious crimes and get away with it.

He pointed out that nobody in the history of Nigeria has committed Kanu’s kind of crime; hence releasing him would be sending the wrong message.

“How do you start considering the release of a criminal like Kanu, who ordered killing of people. Because of his criminal style of agitation, the Southeast is no longer peaceful, releasing him would be sending the wrong signal that people can just do anything and get away with it.

“This is my view. The president should allow the judiciary to do their work and not listen to all those appeals. If the courts find him guilty, he should face the music and if it’s the other way round, he should be released.

“The president, while considering should also note the damage Kanu is capable of doing if set free.