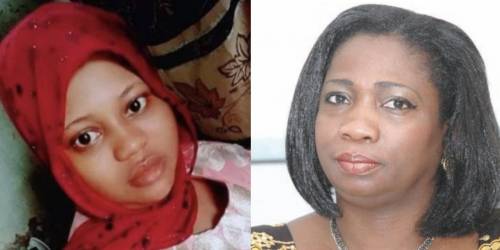 Chairperson of the Nigerians in Diaspora Commission (NIDCOM), Abike Dabiri-Erewa, has promised to get justice for the Nigerian lady who died in an Ivorian prison, Itunu Babalola.

Babalola got into trouble when her apartment in Bondoukou, Cote d’Ivoire was burgled in September 2019.

Things took a new twist when she reported the burglary incident to the Ivorian police. Babalola was arrested and accused of human trafficking after refusing to bribe the police.

The 21-year-old Nigerian was charged to court and sentenced to 20 years in prison, which was later reduced to 10 years.

Unfortunately, the Oyo indigene died in a Cote d’Ivoire prison on November 15 after suffering from diabetic complications.

During an appearance on a Channels Television programme, Sunrise Daily, Dabiri-Erewa said the Nigerian government will ensure that the deceased get justice.

The NIDCOM boss added the office of the Attorney-General of the Federation is already aware of the case and already looking into the matter.

Dabiri-Erewa promised that there will be no cover-up or compromise, adding the Ambassador of Nigeria to Cote d’Ivoire has demanded an autopsy.

She said: “Right now the ambassador has demanded that an autopsy be conducted, a strong statement has been issued on their website and condemned the way she was treated in the first place. How does burglary become human trafficking even if she used a fake name?

“We are waiting for the result of the autopsy and the Ivorian government has promised that everything will be done and no cover-ups.

“We don’t expect that this case we just go away like that, the case must go on; so that even in death she must get justice. NiDCOM has written to Interpol. They should look into it.

“The office of the attorney-general is following the case, the Nigeria government won’t allow it to go away like that.”

Dabiri-Erewa stated that NIDCOM has petitioned INTERPOL on the matter and that the commission will see the case to a logical conclusion.