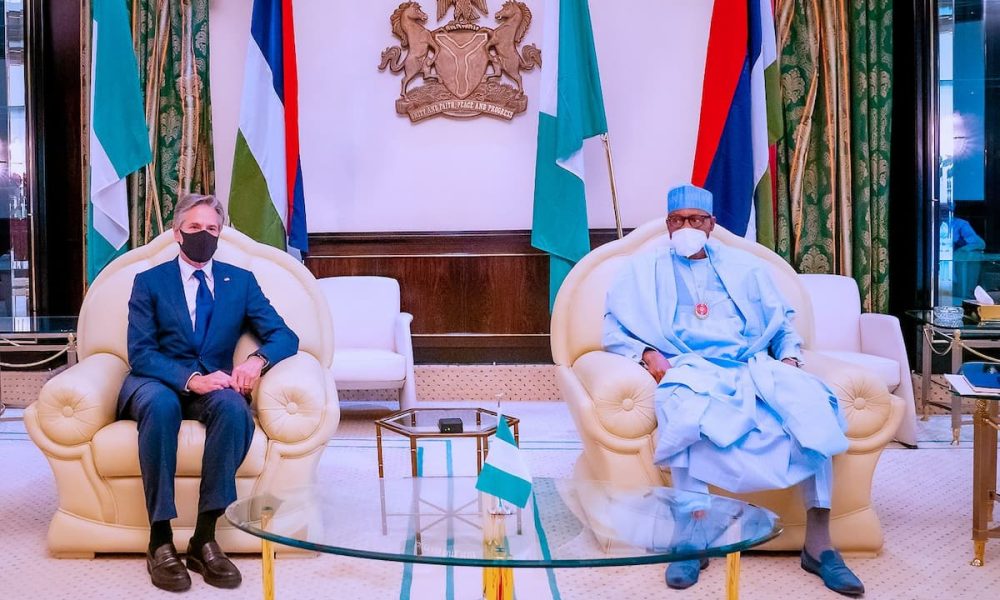 Federal Government will allow the system to exhaust itself, and will, therefore, wait for pronouncements from state governments which set up panels to probe police brutality in the country, President Muhammadu Buhari has said.

“So many state governments are involved, and have given different terms of reference to the probe panels,” the President added. “We at the Federal have to wait for the steps taken by the states, and we have to allow the system to work. We can’t impose ideas on them. Federal Government has to wait for the reaction of the states.”

On the recent removal of Nigeria from watchlist of countries violating religious freedom, which Blinken said was “based on facts,” President Buhari expressed the country’s appreciation, noting that there was freedom of worship in Nigeria, and no one is discriminated against on the basis of his or her faith.

He said education is a priority in the country, “because when you educate a people, there are certain levels they will not fall below.”

The President equally appreciated the United States of America for allowing Nigeria to procure military hardware to fight terrorism in the country, and for the training given to Nigerian military.

“It’s helping us to stabilize the situation in the Northeast, and we’ve made a lot of progress since 2015,” he said. “We are doing a lot on security, and the people involved appreciate our efforts.”

On development of democratic ethos, President Buhari said Nigeria has adopted the American model, “hook, line, and sinker, with its term limits. Those who have attempted to breach it were disappointed, if not disgraced. You are even lucky if you have two terms. Others try hard, and don’t get it. The American model has been accepted by Nigerians as the best.”

Nigeria and her neighbors, the President noted, have been living with the impact of climate change for a while, which has seen the Lake Chad shrink drastically from its original size, and affected the livelihood of about 30 million people in the Lake Chad Basin countries.

“That is why the youths defy the Sahara Desert and the Mediterranean to attempt emigrating to Europe. Inter-basin water transfer is needed to keep the youths at home, and they can resume their lives of farming, fishing, and animal husbandry.”

Mr Blinken, who had held a virtual meeting with the Nigerian President earlier in the year said jocularly that it was now good to see him “mask to mask, hoping that we will soon see face to face.”

He appreciated the contributions of President Buhari to protection of the climate, particularly his presence and contributions at the recent COP26 climate conference held in Glasgow, Scotland.

Blinken said America and Nigeria have diverse challenges, but a common denominator is security, and hoped for better partnerships, “so that the bad guys won’t get the good guys.”

He described the report of the EndSARS probe panel as “democracy in action,” stressing that America equally had its own police brutality, and hoping that necessary reforms would be made.

Meanwhile, the Lagos State chapter of the All Progressives Congress says the leaked report of the Judicial Panel of Inquiry on Restitution for Victims of SARS Related Abuses and Other Matters is an attempt to unleash further misery on the state.

APC spokesman in the state, Seye Oladejo, disclosed this via a statement issued on Thursday.

“Without any doubt, it is distasteful that commentators have based their utter condemnation on a leaked report which has led to some of the content being disputed by some members of the panel,” the statement read.

“The intention of those behind the leaked report should be condemned by all and sundry as it constitutes another attempt to unleash further mystery on the state.

“It is the height of irresponsibility and inhumanity to seek political gains from our collective trauma as a nation.”

While commending the leadership role of the state governor, Babajide Sanwo-Olu, the APC said the governor identified with and addressed the demands of the protesters during the crisis.

He stated that the Lagos State Government which was the first to set up a panel of inquiry to unravel the mystery behind the incident also backed the panel to successfully carry out its assignment.

According to Oladejo, the role of the state government in standing with people at this trying moment and keeping the faith by publicly receiving its report is no doubt commendable.

“The immediate set up of a committee to prepare a white paper is also in line with keeping the faith. While we await the white paper on the reports, we want to urge restraints in order not to set our dear state on fire again.

“We commiserate with the families of those who lost their lives during the protest and other police brutality.

“We urge the Lagos State government to remain focused on its constitutional responsibility to protect the lives and property of all citizens and jettison needless distractions,” the APC spokesman added.